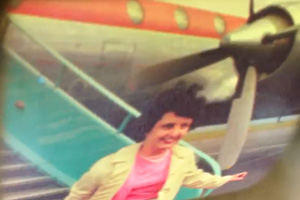 A woman who believed she could be seen in old-fashioned video images in Thomson Holidays’ recent Dreamliner TV advert has lost a complaint that she was featured without permission.

The advertising watchdog rejected the complaint after Thomson parent Tui UK argued that it was a case of mistaken identity.

The footage came from a home video of a couple’s holiday in Luxembourg in 1966 and was sourced from the Media Archive for Central England (Mace).

The archive confirmed that the name of the person featured was not the unnamed woman who complained to the Advertising Standards Authority.

Tui said it had received several pieces of correspondence, all from individuals claiming to know or actually be the woman in the film.

The travel company said that it was “fairly easy” to misidentify the woman in pink walking down the steps of the aircraft.

Giving its ruling, the ASA said it “concluded that the woman featured in the ad was not the complainant, and that Tui had the relevant permissions from Mace to use the footage”.