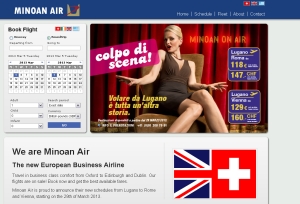 A Greek airline has started services between Oxford airport and Edinburgh ahead of the launch of a Dublin route tomorrow (Wednesday).

Crete-based Minoan Air is using Fokker 50 aircraft on the two routes. The move is creating up to 30 new jobs including 10 cabin crew based at Oxford.

Lead-in fares on both routes are £51 one way including taxes and complimentary refreshments on board.

Oxford-Edinburgh will initially be served three times a week on Mondays, Tuesdays and Thursdays while Dublin flights will operate on Wednesdays, Fridays and Sundays.

Frequencies are due to rise to a daily service on both routes from May 10.

Crete-based Minoan Air is the first Greek airline to establish an operational base outside its own country.

In addition to the Oxford flights, the company, headed by chairman George Mavrantonakis, plans to introduce scheduled flights between Lugano, Switzerland and Venice at the end of March.

The airline, which is backed by a consortium of investors including one of the largest Greek shipping conglomerates, has a fleet of four Fokker 50s and is to introduce a further three similar aircraft this year.