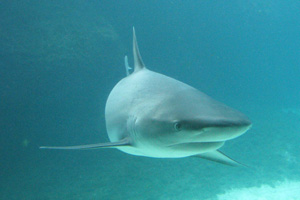 A British tourist who found fame thanks to a viral video earlier this year has been fired from his job at a children’s charity.

Paul Marshallsea, from Merthyr Tydfil in Wales, was hailed as a hero in January when footage of him grappling with a shark off an Australian beach was posted on the internet.

But Pant and Dowlais Boys and Girls Club has claimed a ‘breakdown in confidence’ left them with no choice but to dismiss both Marshallsea and his wife, Wendy, who also worked for the charity.

In a letter to the couple the charity’s trustees said: “Whilst unfit to work you were well enough to travel to Australia and, according to recent news footage of yourself in Queensland, you allegedly grabbed a shark by the tail and narrowly missed being bitten by quickly jumping out of the way.”

“The breakdown of the trustees’ confidence and trust in you and your ability to perform the role is so great that we find that dismissal is the only course of action we can recommend.”

The pair were holidaying in Australia while on sick leave for work-related stress, having been advised by their doctor to take a trip away. The Welshman’s moment of fame occurred while at a beach north of Brisbane in Queensland, when he grabbed the six-foot-long dusky whaler shark by the fin to lead it out into deeper water.

Marshallsea, formerly the charity’s project co-ordinator, told WalesOnline.co.uk: “If I hadn’t gone in to save the kids on that beach that day my wife and I would still have a job.”

“You’d think being in charge and running a children’s charity, they would have patted me on the back and congratulated me.

“I never thought for one minute that wrestling with a shark would cost me my job.”