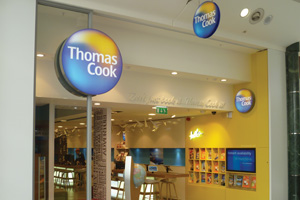 Thomas Cook has started a month-long test of three new store concepts and will choose one to spearhead a refresh of its high street presence.

The company gave three stores – in Stowmarket, Stamford and King’s Lynn – a makeover in different styles and colours last week and will decide by the end of the month which to roll out nationally. It plans to have 90 stores revamped by September.

Speaking exclusively to Travel Weekly, retail director Joanna Wild said the refresh would signal to customers and staff that Thomas Cook is back.

“These are traditional stores and the idea is to make them clean, fresh, modern. They will look bigger, brighter,” she said.

“There are three different concepts, with different colours, different graphics, different chairs. We’ll decide in the next two to three weeks which to roll out and [aim to] have 90 smaller stores refreshed by September – the end of the financial year.” The programme will continue beyond that.

Wild declined to say how much the programme would cost, but described it as “a significant investment”, adding: “The refresh programme shows our commitment to the high street.”

It comes alongside a ‘store of the future’ programme for large outlets, the first of which launched in Leeds’ White Rose shopping centre in December. Wild reported revenue at the White Rose store in the first three months had exceeded Cook’s target by more than 50%.

Wild spent the past week addressing meetings of store managers around the country, explaining the new cluster-manager approach to running shops.

She said: “Some store managers may step down [to become assistant managers]. Some will be promoted to cluster managers. Some will leave.”

But Wild insisted: “Staff have a future in retail. There will be opportunities for promotion. People can see we have a future, can see the pace at which we are changing and that we have a sustainable and profitable business – and the pace is infectious.”