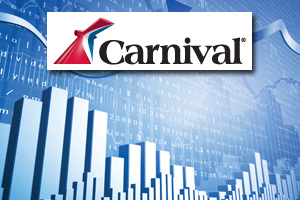 Carnival Corporation shares sunk by as much as 13% in the wake of an overnight profits warning on Monday.

The shares were down 8.6% at £22.02 in afternoon trading yesterday, the Financial Times reported.

“It is disappointing that management has left it this late in the season to issue its warning and, in our view, it has questions to answer,” he told the FT.

Karl Burns of Panmure Gordon said the decline in yields “bodes ill for the future as we think Carnival will struggle to regain pricing power”.

He added that “the market must begin to appreciate there are structural as well as cyclical challenges to the Carnival business model”.

James Hollins, Investec analyst, said: “The Carnival bull story has taken a major hit and we look for further detail at the time of Q2 results in late June.”

The negative responses followed the cruise giant saying net revenue yields will be down 2% to 3% this year as a result of cruise price cuts employed to boost booking levels.

Earnings will also be cut by 10 cents a share as a result of cruise cancellations following technical faults on a series of Carnival Cruise Lines ships.