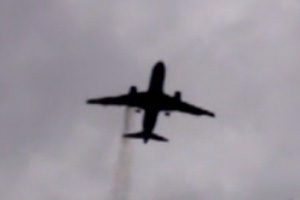 Both runways at London’s Heathrow airport were closed this morning after a British Airways plane was forced to make an emergency landing.

The aircraft, an Airbus A319 en route to Oslo, departed Heathrow at 08.16 but was forced to make an emergency landing. All passengers and crew were safely evacuated.

Smoke was reportedly seen coming from the rear of the aircraft. David Gallagher, who says he was on the BA 762 flight, tweeted a photo that appears to show part of one of the jet engines exposed.

A spokesman for London Fire Brigade said that it had been called to the scene of an airside fire at 08.39 and that crew at Heathrow had attended with two other crew from nearby Feltham on standby.

A statement from British Airways said: “The BA762, Heathrow to Oslo service, returned back to Heathrow shortly after take-off due to a technical fault.

“The Airbus A319 aircraft was carrying 75 customers. The aircraft landed safely and emergency slides were deployed and we are currently caring for our customers.

“Emergency services attended the aircraft. We will be carrying out a full investigation into the incident.”

Normand Boivin, chief operating officer of Heathrow said: “Heathrow is now fully operational and the airport is returning to normal. All passengers and crew were safely evacuated from the aircraft. BA is currently caring for its customers.

“The temporary closure will result in a number of cancelled flights throughout the day and passengers are advised to check the status of their flight with their airline before travelling to the airport.

“I would like to pay tribute to BA’s pilots and Heathrow’s fire and airside teams. In particular, I’d like to thank this morning’s airport duty manager Mark Freeman and his team for their quick and professional response to today’s incident.”

Mark Freeman, duty manager at Heathrow airport said: “Incidents like this are extremely rare but the team trains constantly to ensure we are prepared when they occur. I’d like to thank the fire and airside team, emergency services and BA for their calm professionalism in assisting passengers and making the aircraft safe.

“We were able to reopen the northern runway within two hours of the incident and we are now focused on returning the airport to normal as quickly as possible.”

A spokesman for British Airways said that all short haul flights departing before 4pm today had been cancelled – a measure to protect the slots for long haul flights. Up to 75 flights are affected.