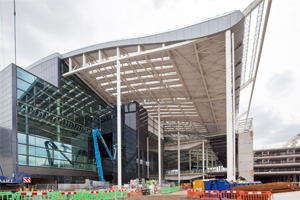 Heathrow’s new Terminal 2 will open its doors a year today, it has been announced.

The airport said the £2.5 billion project was part of the “next major phase” in its “ongoing transformation”.

The first aircraft scheduled to land at the new terminal on June 4 next year will be a United Airlines flight from Chicago, arriving at 05.55.

The terminal will eventually serve 20 million passengers a year and will be home to 23 Star Alliance airlines, as well as Aer Lingus, Virgin Atlantic Little Red and Germanwings.

The scheme includes the main terminal building, a 522-metre satellite pier, a 1,340-space car park and an energy centre and cooling station. It is expected that around 25,000 staff will be trained to work at T2, including airline staff, retailers, cleaners and delivery drivers.

The main build is on schedule to be completed in November, and will be followed by six months of testing. By the time the terminal opens its doors, it will have undergone 182 trials and been tested by 14,000 people.

The terminal will open in phases, with the 26 airlines moving in over a period of six months. Just 10% of flights will operate for the first three weeks of June before gradually building up to full operations.

Check-in facilities will be large enough to accommodate 3,000 passengers an hour. When fully operational, an average of 55,000 passengers will arrive and depart from the terminal daily.

He said: “The new Terminal 2 has been designed around the needs of our passengers, to allow them to get to and from their flights as quickly as possible.

“Like Terminal 5, it will promise world-class customer service and a warm welcome to Britain, which visitors expect from the UK’s hub airport.

“This next step in Heathrow’s transformation will deliver a better journey for passengers, a more efficient and reliable infrastructure for airlines and additional jobs, trade and economic growth for the UK.”

The airport said passengers were at the heart of the terminal design and that the latest technology will be used. The project is part of Heathrow’s vision to be Europe’s hub airport of choice.

Passengers will be able to choose from a selection of 52 shops and 17 bars and restaurants. Passengers will also benefit from pushchair-friendly concourses, short-stay car parks with space-finding technology, self-service check-in options, multi-lingual ambassadors and personal shoppers.

Crown House Technologies in Dartford won the £100m mechanical and electrical works contract for T2A, Severfield-Watson Structures in Bolton and Thirsk were paid £50m for designing, fabricating and erecting the main steel frame for T2A and T2B. Commercial Systems International in Hull was tasked with supplying the giant Slipstream sculpture.

The old Terminal 2, opened by the Queen in 1955, was demolished in 2010 after closing a year earlier. It was designed to deal with 1.2 million passengers a year, but by the time it closed it was handling 8 million.

Lord Deighton, the Commercial Secretary to the Treasury, said: “Infrastructure is quite rightly at the heart of government plans. We’re investing more, cutting red-tape and improving government capability to deliver more infrastructure projects. But the vast majority of investment and delivery capacity lies in the private sector with projects such as Terminal 2, which forms part of the government’s Top 40 priority infrastructure investments.

“The excellent work here reflects best practice in infrastructure delivery, progressing on time and to budget, working collaboratively with its suppliers.”