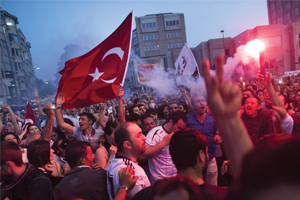 Research suggests three out of four consumers would think twice about booking a holiday in Turkey as the government cracks down on protests.

A study of 500 consumers at the weekend found 50% “would not consider Turkey for a holiday at present” and a further 24% are “unlikely to book at present”, meaning three out of four would shy away from the country.

The Explore research was carried out as police cleared protesters from Taksim Square in Istanbul. The government threatened to deploy the army against further protests, which began on May 28, as Travel Weekly went to press. However, there were no reports of  police action in resorts.

The market to Turkey had been riding high. Industry analyst GfK reported summer bookings up 2% on last year  for the season to June 8 and had  Turkey as the second biggest-selling market as recently as the week of June 1 – with average selling prices up £26  on a year ago. The following week it reported prices down £42 on last year.

Explore surveyed 500 adults who had taken a foreign holiday in the past five years and asked how they would react if they had a Turkey holiday booked: 17% said they would cancel and 36% “would prefer to go elsewhere”, meaning half did not want to visit now.

People who had visited Turkey were far less concerned, with just 25% saying they would not consider a holiday compared with 67% of those who had not been to the country.

Aito chairman Derek Moore said: “The troubles seem confined to Istanbul and don’t appear to have affected bookings to the southern resorts, but we’ll keep a watching brief.”