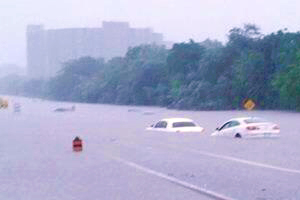 Parts of Toronto have been flooded with 300,000 people left without power following a heavy rainstorm.

Hundreds of passengers were stranded for several hours on a flooded commuter train and had to be evacuated on police boats.

Porter Airlines cancelled flights to and from Toronto due to the violent weather.

Toronto mayor Rob Ford told CBC Radio that “it’s all hands on deck” to deal with the fallout from the storm and the damage it has caused to the city.

The mayor also urged people to stay inside their homes, warning them to expect more heavy rainstorms.

Parts of Alberta, including Calgary, have also suffered from flooding recently.