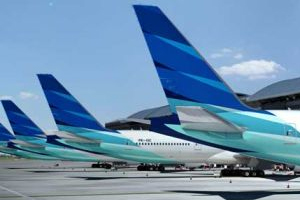 Indonesian carrier Garuda has been forced to delay the start of flights to Gatwick which were due to start in November.

The airline said the runway at Jakata’s Soekarno-Hatta international airport does not meet requirements for the operation of Boeing 777-300ER aircraft.

The service has been put back until May 2014, when runway improvements are expected to have been made, with five flights a week planned.

The poor state of the runway at the airport means that the airline is unable to operate the 777 non-stop with a full load of 314 passengers and 11 tons of cargo.

President director Emirsyah Satar said: “Due to such conditions there will be a ‘restricted take-off weight,’ which means Garuda Indonesia has to reduce capacity by 39 passengers and cannot transport cargo during each flight, thereby causing the carrier to suffer significant losses.”

The option of operating with one stop between Jakarta and London has been dismissed as being uncompetitive.

The non-stop flight duration from Jakarta to London is 14 hours 35 minutes.

Fares are now being finalised, and the new flights – with special launch offers – will be on sale very soon, the airline said.