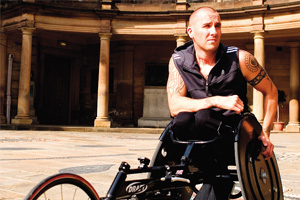 Wheelchair athlete James Price isn’t someone who lets his physical challenges prevent him from achieving his goals.

There’s a video on YouTube of his appearance on the BBC’s Holiday Show when he tried skydiving and white-water rafting in New Zealand.

And last year came one of his proudest moments when he was chosen to represent GB wheelchair rugby in the London 2012 Paralympics torch relay.

Although admitting he initially struggled to get excited about the honour, in the end he was blown away by the support on the streets of Tring, Hertfordshire, despite the fact his stint came at 1am.

“It was a humbling experience to see so many people had stayed out to support us – I felt like a rock star,” he said.

So while Price’s mission – to establish a global standard for accessible hotel rooms – has encountered plenty of barriers, he is determined to overcome them.

The broken neck he suffered in a diving accident in 1999 has never got in the way of Price pursuing his dreams, travel being one of his favourite pastimes.

For the past 10 years, Price took his idea for a hotel booking website to a number of industry bodies and tour operators but, having been turned away by most, he decided to go it alone.

He has now set up Access All Rooms (accessallrooms.com) after being introduced by his business partner Charles Mayhew to Pegasus, a US hospitality technology firm.

Access All Rooms claims to be the first website that will enable customers to book specific hotel rooms, each of which will be graded according to Price’s own Global Access Award Scheme.

This will allow all properties using the Pegasus Connect system to load their accessible rooms free of charge on to the website, making them directly bookable.

Price has also won backing from the Preferred Hotel and Supranational Hotel groups, which will be pushing the concept out to its members.

Preferred has 30 properties with accessible rooms built into its central reservation system and has been working closely with Access All Rooms on the integration.

Currently, only one hotel is available, but the site is still being built and Price hopes to have more than 100 hotels before opening for bookings towards the end of  this year.

“Until now, a big bugbear with booking accessible rooms is you can request one, but until you get there you do not know if you are going to get one,” said Price.

“When I started this, all I wanted was to create a grading scheme for hotels, but as time went by I was aware of the lack of provision to be able to book rooms in real time.

“This has been what I’ve wanted to do from when I went to the US for the first time after I broke my neck and a travel agent had no idea where they could book me an accessible room.

“It’s amazing that the travel industry is so forward-thinking in many areas, but also how backward it is as well.”

Although Price is approaching this from the point of view of accessible rooms, he sees no reason why individual room bookability should not become the norm.

Currently, families are unable to directly book interlocking rooms, for example. The cruise industry is far more advanced in this respect, allowing customers to choose their cabin.

Price calls his target audience the Time market – Tourism Industries Market in Equality – which encompasses people with disabilities but also the elderly and long-term ill.

He estimates nearly 90 million people fit this category in Europe, with the market worth anywhere between €89 billion to €166 billion annually.

“For those hotels that have invested in accessible facility upgrades – by choice or through forced legislation – we are the first hotel booking website trying to market and sell their accessible product specifically and return yield on their investment,” he said.

“I really hope hotels and chains will embrace this new way of tackling the Time travel niche and will get behind us by bringing their hotel and product to our site.”