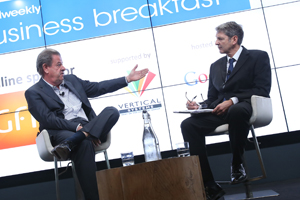 The boss of Europe’s largest travel firm has said major companies should be able to withstand shocks, as the US this week appeared to be preparing to take military action following a suspected chemical attack in Damascus.

He said: “We’re very clear that within our model there’s probably £30 million or £40 million of costs each year that will come our way and the only thing that’s certain is that they will be different.”

Despite having navigated travel companies through two Gulf wars, Long said the most difficult event to deal with was the ash cloud crisis of 2010.

He told delegates: “If someone had said to me a volcano has erupted and there’s some ash in the sky and your aircraft will all be grounded, I’d say ‘don’t be silly, that can’t happen’.

“We had 140 aircraft on the ground racking up huge costs; it cost more than £100 million. It was a real curveball that we didn’t expect.”

Long said dealing with “shocks” was an important part of running a listed company. “Our industry is a very uncertain environment: there are lots of shocks; you don’t know what they’re going to be, but we know they’re going to be there and they’ll be very different.”

International intervention in Syria is looking increasingly likely, with reports that military bases in Cyprus would be used to launch attacks on President Assad’s regime.

The foreign minister for Cyprus sought to reassure tourists about the safety of the island, which lies just 60 miles away.

Ioannis Kasoulides said: “We take precautionary measures, but that does not mean there is any foreseeable threat to the safety of Cyprus, its population and its tourism.”

The Foreign & Commonwealth Office amended its advice for travellers to Cyprus, warning of an “increased risk of demonstrations, linked to the possibility of military action in Syria”.