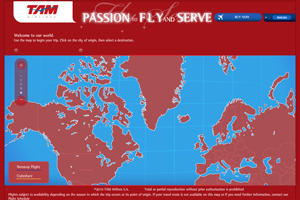 Brazilian carrier TAM is to switch from the Star Alliance to Oneworld next spring.

TAM is part of the LATAM Airlines Group, created out of last year’s merger between TAM and Chile-based LAN.

LAN has been a longtime member of the Oneworld group. Chilean regulators required LATAM subsidiaries LAN of Columbia and TAM to exit one of the alliances as a condition of the merger.

In addition, US Airways proposes to switch from Star to Oneworld as part of its planned merger with American Airlines, which still remains subject to necessary approvals.

“We look forward to welcoming TAM and its customers on board the world’s premier global airline alliance with effect from 31 March next year.”

TAM Airlines’ chief executive Claudia Sender added: “We want to introduce Brazil to our new partners and welcome them into our country.  In the coming months, we will continue working to ensure a smooth transition for everyone.

“We also want our passengers to learn about the benefits, connections and products offered by Oneworld so they can travel the world with us.”

TAM serves 60 destinations in 16 countries in Latin America, the US and Europe, with a fleet of 161 aircraft operating 800 daily departures. It carried 38 million passengers in 2012.