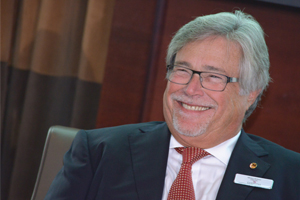 Carnival chairman Micky Arison says giving up the role of chief executive has ‘yet to hit home’. Lee Hayhurst reports

Micky Arison’s immediate reaction to being asked about the decision to relinquish his long-held role as chief executive of Carnival Corporation is to joke he hasn’t invested in a set of golf clubs quite yet.

A cruise industry icon – with as big a presence in his sector as Sir Richard Branson has in aviation – Arison, chairman of the cruise giant, was speaking to Travel Weekly as P&O Cruises revealed Britannia as its new ship’s name.

Looking characteristically relaxed sitting in London’s Four Seasons hotel alongside Arnold Donald, his successor as chief executive, he admitted he was still getting used to taking a step back.

Over the past four decades Arison has helped to build the family business into the world’s biggest and most successful cruise operator, having served as chief executive since 1979.

So how does he feel about the transition which saw Donald, a board member of 12 years, take up the reins on July 3?

“It has not really sunk in yet. I’ve still been doing what I would normally do,” he said. “But as we go through the planning process and work towards budgets it will start to hit home.”

When the announcement was made in June that Carnival was splitting the chairman and chief executive roles, it was seen as a reaction to recent high-profile incidents that rocked the operator.

The Costa Concordia tragedy in January 2012 was followed by a fire on Carnival Triumph in February, which prompted a further flurry of damaging publicity in international media.

Arison said he was taken aback by the initial negative reaction to the decision, but added that the incidents had actually delayed the succession process rather than precipitated it.

“We had been talking at board level about the issue for a long time,” he said.

“The events of Concordia and Triumph delayed the decision each time. It was decided to get these events behind us.”

A key moment came when Carnival held a board meeting in the UK in April when the issue was raised again.

In the UK it is usual for corporations to have split chairman and chief executive roles, whereas until recently it had not been quite so commonplace in the US.

However, once the decision had been taken, Arison said he realised that 40% of companies listed in the Standard and Poors 500 – a stock market index of large firms – now have a dual role set up.

When it came to finding a successor, Arison said he consulted Donald, who at the time did not appreciate he was describing himself when he described the kind of person they should look for.

“After getting his view and those of others on the committee, I slept on it for a month and called back and said ‘I want you to think about Arnold’,” said Arison.

Running a global cruise operator with a market capitalisation of $25 billion, 11 brands and more than 100 ships is a daunting enough role to take on without also succeeding a figurehead.

Donald said: “I really had to think hard about doing it, but now I have done it I don’t know why I had to think so hard.

“Micky is here, he is chairman and he makes it easy. He is an icon to talk to on any issue, and his style of management is one of delegation not abdication.”