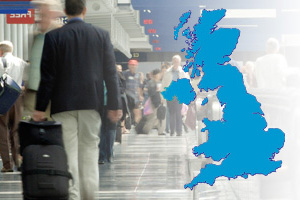 Britain attracted increasing numbers of foreign tourists in August while those holidaying aboard also rose.

Figures released by the Office for National Statistics show a 16% rise in inbound visitors to almost 3.5 million in the peak summer month.

At the same time, those travelling from the UK in August increased by 8% year on year to more than 7.7 million, with expenditure up by 13% to almost £5 million.

UK residents’ visits abroad rose by 4% in the June to August period, with spending rising by 6% to £11.8 million over the same summer quarter last year.

Overall visits abroad in the 12 months to August grew by 2%, with expenditure up by 4%. Visits to other parts of Europe grew by 4% while trips to North America fell 5% and to other countries by 1%.

Visits to friends or relatives grew by 8%, holiday visits grew 2% but business travel fell by 1%.

Meanwhile, the amount spent in the first eight months of the year by travellers to the UK remained at record levels, up by about 11% at £13.7 billion.

Holiday trips to the UK broke monthly records for the fourth consecutive month, as overall inbound numbers grew by 16% to 3.5 million, according to the ONS.

Those arriving from outside Europe and North America jumped by 28% – the highest level for a single month.

Arrivals from North America continued to recover with a rise of 14%, making it the best August since 2009.

VisitBritain chief executive Sandie Dawe said: “More people than ever from around the world are choosing to holiday in Britain, with record numbers coming from the high spending markets of Latin America, Middle East and Asia Pacific.

“This all adds up to a new milestone of spend over a 12 month period of £20 billion, which proves the massive contribution that inbound tourism makes to the UK economy.”

Commenting on the latest figures released by the ONS Mike Saul, head of hospitality and leisure at Barclays, said:

“The UK is proving its global appeal as tourist numbers strengthen for the fourth month running – no doubt last year’s Olympics will have helped boost like for like figures.

“Holidaymakers have also been making the most of their breaks, cashing in on the favourable exchange rates. On the home front, the summer escape continued with many Brits taking advantage of the last bank holiday before Christmas.

“With both rising consumer confidence and spending, we’re already seeing this trend continue with early ski bookings for next year coming through.”