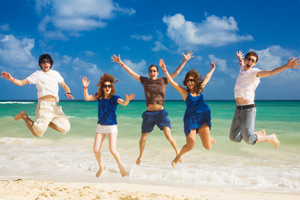 Consumer satisfaction levels hit 90% for holidays taken this summer, according to new research.

The figure is based on a sample of 13,000 holiday ratings and reviews left by holidaymakers over the summer released by global feedback engine Feefo.

The study found that ‘excellent’ ratings increased by nearly 9% compared to last year, while negative reviews declined by more than 2% over summer 2012.

This demonstrates that tour operators continue to deliver the high standards expected by consumers, according to Feefo.

The report also highlights the top five drivers for positive ratings, with one in three (33%) citing ‘staff service’ as the most significant factor, closely followed by the quality of the hotel accommodation (31%).

Feefo chief executive Andrew Mabbutt said: “This is excellent news for the travel industry and also for consumers whose voice is clearly being heard.

“These positive trends highlight the improvements that the industry continues to make in delivering the choice and quality that drives consumer satisfaction.

“Compared to positive reviews, negative ratings are often supported by a more in depth qualitative review.

“Negative customer verbatim is often feared by businesses when, as highlighted in the report, used effectively it should actually be welcomed.

“By using customer feedback effectively travel businesses will demonstrate to consumers that they not only value their feedback, but that they are also willing to act upon it in a transparent way.”

The report highlights a good year for UK ‘staycations’ – with 68% of consumers who chose to stay and holiday within Britain rating their holiday as ‘excellent’ – an increase of 3.5% over last year.

But the findings suggest that although negative reviews have decreased by more than 2%, more can still be done among the 9% that rated their holiday as a negative experience.