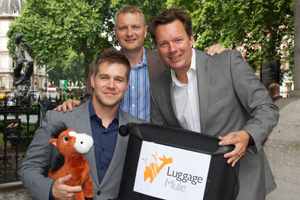 Agents will be paid a flat rate commission of £5 per bag booked through a new home-to-port luggage delivery service.

A launch rate of £50 per bag will apply for the first 2,000 bags carried by the service, which will initially serve ships departing from Southampton.

The initiative is being introduced by Luggage Mule in a tie-up with global ground handling and port agency firm Intercruises to allow for bag deliveries from home to cruise cabin and back again.

The introductory offer of £50 return for a 30kg item of luggage, with a two-day delivery turn around, from pick up at home to drop off at the passenger’s cabin.

The service is to be extended from Southampton to popular Mediterranean departure points such as Barcelona.

A large weight allowance of 30kg per bag has been set deliberately, recognising that many cruises departing from the UK are for longer durations, requiring more luggage than an average seven-night beach holiday.

Luggage Mule says it is not willing to enter into any exclusive deals with cruise retailers, but will be looking to sign strategic long-term deals with key partners.

A few lines already offer a similar service but charge more than $400 for the service, making it purely for the “super rich”, Luggage Mule claims.

Company investor Steve Endacott said: “The cruise industry seems to have broken the back of its historic discount culture, but does not appear to have found many other ways to differentiate their retail offering, outside of onboard ship credit and vouchers, etc.

“I believe that the new Luggage Mule cruise service offers a massive level of differentiation for those retailers offering it to their clients, by making the journey to and from the cruise much easier, whilst earning commission of £5 per bag in the process.”

Managing director Jordan Makin, launching the concept at today’s Clia UK & Ireland Selling Cruise conference in Southampton, said: “Given that the average price per cruise is nearly £5,000 per couple, we think a 1% surcharge to offer such a massive level of product differentiation is a no brainer at £50 per bag and will drive a high level of uptake.

“We believe the home to cabin service will be very popular with cruise customers, who are often a little older and would welcome a concierge service that removes hassle by picking up luggage from their doorstep and delivering directly to their cruise ship cabin.”

“We believe that once customers have used the service, they will become brand advocates, promoting the service to other customers on board.”