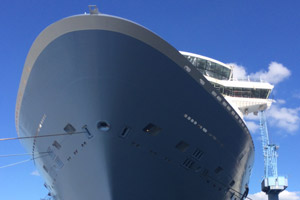 Quantum of the Seas “breaks us out of the typical cruise category and we need agents to spread the word”, according to Royal Caribbean’s vice president international Dominic Paul.

Speaking from the Papenburg shipyard where Quantum is just three weeks from completion, Paul told the assembled trade partners: “We have brought our best trade partners and media on board Quantum three weeks before she’s going to sail because we truly think that something incredible has been created here.

“We haven’t done this before, but Quantum changes everything – the quality, the technology; it’s a truly amazing, breathtaking, inspirational ship and we wanted to share our passion for it with you.

“Now we need you to get that message across. We need you to spread the word that cruising is different to what people might expect. We think people will be knocked over by the amazing design and incredible features.

“We need you to get the message across and make sure that people pay the prices that this ship truly commands,” he appealed.

Agents from the UK, US, China, Australia and other European markets were invited to the preview tour in Germany.

Paul said: “The reason we’ve invited this international group on this ship is because she’s a very international product. This class of ship is going to go all around the world.

Quantum will sail Caribbean itineraries from New York initially before heading to Shanghai in June to serve the Asia market.

“This puts us as the clear number one in the Chinese market and makes a statement of intent to be number one in China very strong,” said Paul.

Quantum’s sister ship, Anthem of the Seas, will serve the UK market, sailing out of Southampton from April 2015.

Royal Caribbean executives announced that features from the Quantum class ships were to be retro-fitted onto other vessels in the fleet.

Virtual balconies have already been added to Navigator of the Seas, the dynamic dining concept is to be rolled out to some ships and all ships are to have improved bandwidth, luggage tracking, speedy check-in, and crew with tablets as refits take place.