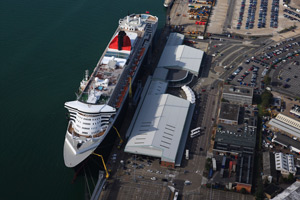 Southampton’s Mayflower cruise terminal is to be revamped in a £6 million renovation project.

The scheme includes a redesign of the departure, check-in, security and passenger lounges as well as drop-off and pick-up areas.

The work to transform one of the port’s four terminals “will bring the Mayflower terminal in line with the requirements and standards of the modern-day cruise ship,” according to operator Associated British Ports.

The work follows the signing of an agreement with Carnival UK, which operates the P&O Cruises and Cunard brands, and is due to be completed by April in time for the summer cruise season.

More than 270 of Southampton’s 430 annual cruise ship calls are owned and operated by Carnival group brands. The number is expected to continue to grow due to the introduction of P&O Cruises’ new ship Britannia next year and weekly transit calls by German brand Aida.

The expansion of the terminal, which will include removing 100 tonnes of blockwork walls and floors and installing 500 tonnes of new steelwork frames, will create a reception area of 35,000 square feet.

A lift capable of carrying 46 people is to be added along with ten new toilets  and heating ventilation.

More than 200 staff will work on the renovation, with just 22 weeks to make the modifications between the last ship leaving the terminal and the first ship arriving back in, according to ABP.

Carnival UK port services and government affairs director Steven Young said: “Cruising out of Southampton forms the core part of our offering to the UK cruise market which in terms of volume is second only to the US.

“This particularly appeals to those who prefer not to fly and who appreciate the ability of being able to drive to the terminal door, hand their keys to a valet parker and then have their luggage delivered to them, for a stress-free travel experience.”

ABP Southampton director Nick Ridehalgh said: “The benefits of the improvements will affect a much wider group than just those heading off on cruises. Businesses across the city, such as taxis, hotels and restaurants for examples, all benefit from the cruise industry.

“We must ensure we continue to work with the cruise lines and their guests to ensure Southampton remains the UK cruise port of choice.”