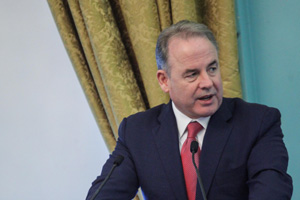 A significant threat is being posed to air travel in the US and Europe due to “dark clouds of protectionism,” the boss of Etihad Airways has warned.

President and chief executive James Hogan was speaking in London the week after European and US carriers again attacked the UAE airline’s rapid growth over the last decade.

“Five mega-carriers are trying to pull the ladder up after years of having it their own way,” he said. “The people that will really lose if these giant legacy airlines are successful are the millions of travellers benefiting from new choice in the global air travel market.”

“Some of the carriers attacking us claim they are losing market share. We’ve started some analysis on this issue and although the detailed study will take some time to complete, I can say that our initial studies already suggest that those claims are true. We admit it,” he told the Aviation Club.

“But that so-called loss has resulted in thousands of new passengers for these suffering airlines, thanks to the market stimulus we provide.

“They are getting a smaller slice, it is true. But it is a slice of a bigger cake. And the bigger cake is proof that more people are able to travel – more consumers are getting the benefits of competitive choice.”

Hogan said it was telling that British Airways had not joined the other legacy carriers in attacking Etihad Airways.

“There’s one global airline that hasn’t complained about the new competition from the Gulf carriers – and that’s your home airline here, British Airways,” he said.

“BA is a business whose steel has been forged in decades of fierce competition – domestically, across Europe and globally. Willie Walsh [chief executive of parent company IAG] doesn’t complain when he sees new competition come into the market – he just gets on and competes.”

Hogan said Etihad Airways’ shareholder, the Abu Dhabi government, had chosen to invest in a new airline at a time when many factors combined to offer major opportunities.

Etihad Airways has received investment in the form of equity capital and shareholder loans.

“The shareholder knew those amounts would need to be significant. It was, after all, setting up a national airline in 2003, decades after most governments,” said Hogan.

“To have any chance of success, Etihad Airways had to get to a size and scale that could compete against the networks of airlines that had not only been operating for years, but had benefited from decades of government investment and infrastructure support themselves.”

The result was an airline that had grown to carry 14.8 million passengers last year over a network that now reaches 111 destinations.

“To become a serious competitor in long haul hub-and-spoke air travel, there is a very, very high cost of entry,” Hogan stressed.

“Our shareholder set clear parameters for that investment. The airline had to get to profitability within a decade. And in the long term, we have to deliver a return.

“Because we have satisfied those conditions, because we have grown more quickly and more successfully than our initial targets, our shareholder has invested further. It has invested in success. Just like any other rational investor.

“Our shareholder may be national but when it comes to money, it is very, very rational,” he added.

He described the debate as being about competition.

“When it comes down to it, competition is what the market wants,” Hogan said.

“It is certainly what the customer wants. People want choice when they travel. Choice means they know things will constantly improve. That’s the same whether you are sitting in Abu Dhabi, or in London, Manchester or Edinburgh.

“It is certainly what the wider economy wants. Air routes stimulate trade and tourism. Trade and tourism stimulate economic growth. Every air route is worth tens or hundreds of millions of pounds of economic impact. We know that is true in Abu Dhabi, as detailed economic analysis has shown.

“And it should be what the airlines want. In almost every case, competition increases the size of the market.

“Maybe we all get a smaller slice – but if the cake is bigger, then everyone benefits.”