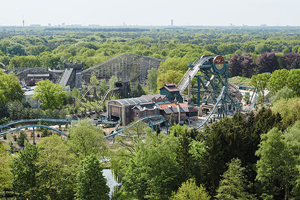 Efteling theme park in the Netherlands will open the Baron 1898 ‘dive’ rollercoaster on July 1.

The 37.5m-high ride, which is themed on the early days of the mining industry, is set on a ‘mineshaft’ base.

Passengers, who must be at least 1.4 metres (4ft 7in) tall, will join one of three lines of ‘mine workers’ to enter the terminal building.

The train will accommodate 18 people in three rows of six.

After dropping from the highest point of the ride, the train completes a half-loop with a half-roll, at about 56mph, followed by a corkscrew roll and a fast spiral.

Fons Jurgens, Efteling’s chairman and chief executive, said: “The entire ride, which lasts 130 seconds, is characterised by speed and sensation.

“The 501-metre track is being supplied by an expert in the field of dive coasters.”