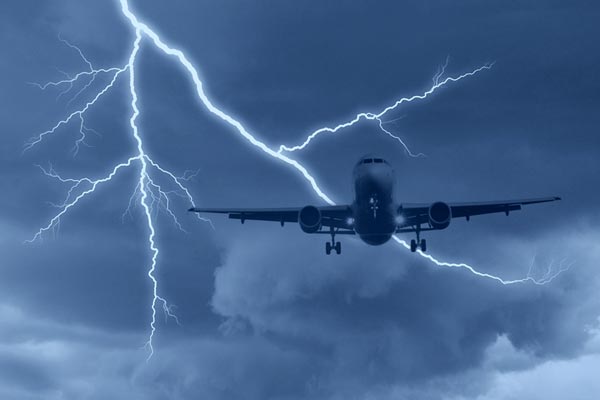 The floodgates could open to compensation claims worth £17.6 million from 54,000 delayed passengers, a law firm has predicted.

The predication came after a judge ruled that lightning strikes are not a valid excuse for airlines to avoid paying flight delay compensation.

The judge at Reading County Court awarded two passengers €600 (£450) each for a five-hour flight delay in an appeal case.

The case involved Monarch Airlines which carried out safety checks on an aircraft at Gatwick after a lightning strike and did not have a spare to fly other passengers home from Hurghada in Egypt on July 4, 2014.

The flight was due to depart Hurghada for Gatwick at 8:05pm but was delayed by five hours due to the disruption caused by lightning striking the aircraft earlier in the day.

Monarch argued that when a plane has to undergo mandatory checks after a lightning strike, this should be considered an ‘unexpected flight safety shortcoming’ – one of the events that European flight delay regulation EC 261/2004 states may be an extraordinary circumstance.

But Judge Melissa Clarke ruled: “Damage caused by a lightning strike may well be an unexpected flight safety shortcoming, but that does not make it an exceptional circumstance … an unexpected flight safety shortcoming is only an exceptional circumstance if it is not inherent within the normal exercise of the carrier’s activity.”

Bott & Co Solicitors successfully argued that lightning strikes cannot be considered extraordinary because they are part of the day-to-day running of any airline.

Following today’s ruling, Bott & Co flight delay lawyer Kevin Clarke said: “This case is about the airline industry having absolutely no measures in place to deal with issues which occur on a day-to-day basis.

“Bad weather is not the airline’s fault, but the law says it is their responsibility. If airlines are not willing to put measures in place to deal with delays caused by weather – something which is a daily concern for them – they must be prepared to compensate passengers for their loss of time.”

The Civil Aviation Authority includes lightning strikes in its list of “extraordinary circumstances” but as Judge Clarke said in yesterday’s ruling, the list is not legally binding and has been proven wrong in court a number of times.

Michael Evans from Northamptonshire, who was on his way home from a two-week holiday with his partner Julie Lee when he suffered the delay, said: “When we got to the airport to check in we must have been standing queuing for an hour or so, before staff told us to get out of the line. We were stuck in the departure lounge for hours.

“When we finally got back to England five hours late, waiting for our bags took over an hour and a half. That was the final straw.

“Now every time we talk about this holiday all we mention is the delay, so it’s kind of taken the shine off it. At least the compensation we’re finally getting will go some way to make up for that.”

A Monarch spokeswoman said: “We are aware of the judgement and are reviewing it internally.”