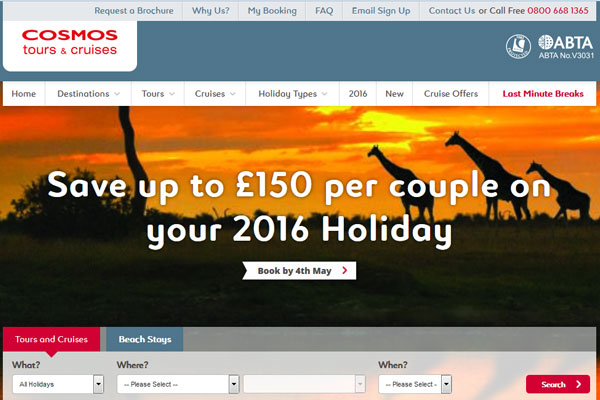 The new boss of Cosmos Tours has unveiled plans to shake up commission rates and open up its Archers Holidays operation to the trade for the first time in 21 years.

New chief executive, Giles Hawke, said he was looking at ways to incentivise and remunerate the trade across all Cosmos Tours brands above the base commission rate of 10%.

Hawke, who was at the centre of Carnival UK’s commission cut in 2012 when he was sales and customer services director, made the decision within days of starting his new role this month to reflect his “unwavering support for agents”.

Speaking exclusively to Travel Weekly, Hawke said: “Commission will in no way be going down. It’s quite the opposite – I want to look at ways we can reward agents further.”

While base commission rates are unlikely to rise, Hawke said he was looking at incentives and overrides based on sales volumes.

“We’re going the other way because we know we can’t grow our business without support from agents,” he said.

Hawke wouldn’t reveal passenger numbers for Archers – its Atol licenses it to carry 13,255 passengers a year – but said it was important agents saw “no barriers” to working with all of the company’s brands: Cosmos Tours & Cruises, Avalon Waterways and now Archers Holidays.

The product range mirrors that of Cosmos Tours & Cruises, but Hawke and his team are to assess whether there needs to be any differentiation between the two.
Archers Holidays will become available to agents in early May.

Hawke said he was also looking to increase the product offering across all brands, but would give no details.