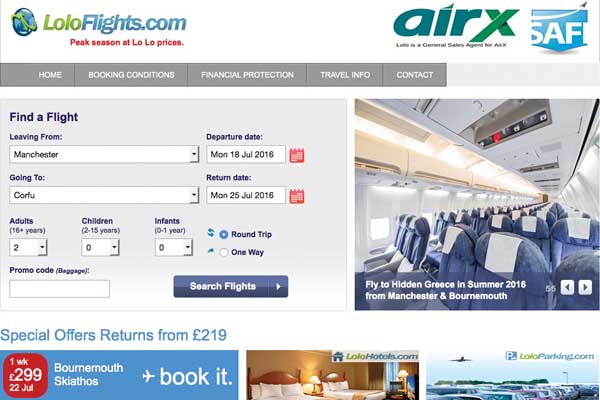 Start-up peak-season flights operator LoloFlights has cancelled its launch for 2016 and begun the refund process of more than a 1,000 tickets sold through the trade.

Owner Paul Dendle had planned to operate flights from Bournemouth and Manchester to Greece this summer, using a former British Midland Boeing 737-500, owned by aircraft broker AirX. But he told Travel Weekly: “We have decided to cancel the programme due to poor sales.

“The model is right, but in hindsight the timing was wrong.

“When we planned the launch, the date of the Brexit referendum hadn’t been announced, the Brussels terrorist attacks hadn’t happened, and the economic chill winds from China hadn’t started blowing in.”

He said his venture had also been hit by competitors rapidly matching his £40-£50 cheaper fares.

Dendle said letters would this week be sent to agents who had booked customers on LoloFlights, and insisted that all sales were financially protected through a trust fund. The refund process is expected to take 10 days. Most trade sales had come through about 20 OTAs.

Dendle, who founded seat‑broker Avro in 1984, said he was planning to resurrect the operation for summer 2017, but not with AirX.

He claimed his niche model was still viable as it was based on the low price of fuel.

“Because of the reduction in the price of fuel, a lot of the old ‘gas-guzzling’ aircraft have become economic again,” he said.

“We can’t compete with the no‑frills on a full-season basis, but we can in peak season and by giving agents some advantage on price”.

Dendle said his operation was ready to be rekindled as soon as he could find a new airline partner.

“Agents and OTAs have lost the leverage they used to have with the no-frills carriers,” he said.

“They no longer get a deal – the price is set. So if we can give them choice and a bit of bargaining power, there will be reduction in price for consumers in peaks, which might erode the margins of the no-frills giants a bit.”