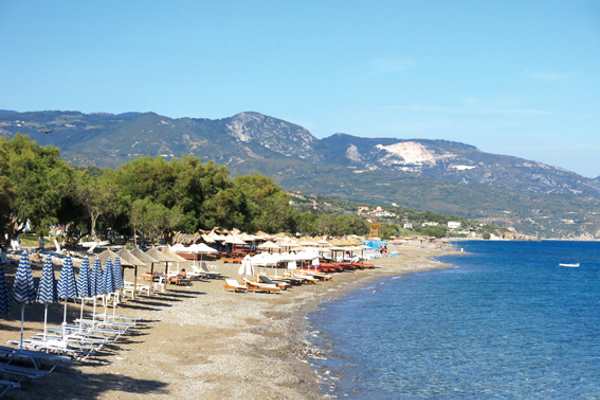 Tourists appear to be avoiding the Greek island of Samos in the mistaken belief it is overrun by refugees. It isn’t, and agents need to get the message out. Ian Taylor reports

It’s June and the Greek island of Samos should be bustling with tourists. But media coverage of the refugee crisis last year remains fresh in people’s minds. There is a belief the islands of the North Aegean are overrun by refugees.

It’s not true. In three days of touring the island, I don’t see a single refugee. Neither does a group of 13 UK agents who, courtesy of Sunvil, have come to see for themselves.

Unfortunately, there are hardly any tourists either. Samos Town is quiet. There are handfuls of people in the tavernas of the north coast resort of Kokari. The beaches of Votsalakia and Limnionas on the south coast are deserted. When I visit the Unesco World Heritage Site of the Temple of Hera there are just six people wandering the ruins.

Nikos Katrakazos is governor of Samos, Lesbos and Chios, and vice-chair of tourism in the North Aegean. He also runs his own travel agency. Katrakazos says: “Last year was difficult – 150,000 refugees came to the island – but there was no problem for tourists. We were just saving people.

“Now the border is closed by the agreement between the EU and Turkey. There are no refugees coming. There are 900 in a camp [in Samos Town] waiting to be processed. They came after the agreement [in March], before the border was closed. Maybe in the last week, two or three came. They have no effect on tourism.

“The TV pictures last year were from Lesbos and Kos, but people saw it on social media and TV and it affected us. Now we are 35%-40% down [in visitors].”

Katrakazos says: “When people came here last year, no one said they had a problem. Sunvil asked clients to send things for the refugees – the last [charter] flight was full of goods for them.

“We did the best we could with the refugees. People brought food, clothes, everything. I’m proud of what the community did. We saved thousands of people.”

Now he says: “Life is difficult for local people. For tourists it’s not a problem. But we have no tourists and people can’t understand why.”

Stamatis Ioannides is owner of the Daphne Hotel in Aghios Konstantino. He says: “The real decrease in Samos right now is 50%-60% [on last year].”

Last summer, he says: “We saw groups of 20-30 refugees walking by the side of the road to the port [of Samos Town] to go to Piraeus. Now we don’t have this. I thought this year would be better. Refugees are not arriving, but tourism is slower. It’s a very difficult situation.”

Ioannides blames the media: “People saw pictures from Lesbos and said ‘Samos and Chios are the same’. The Samos economy depends on tourism – 70%-80% of the economy is tourism. People wait for the summer to work. Whole families are working in tourism. Things are very difficult.”

The Daphne is the only hotel still open in Aghios Konstantino: “There were two or three more hotels, but they closed,” says Ioannides. “I had to bring money from other businesses.

“If I thought like a businessman I would close this hotel. I have no earnings from here, but I love this place. I hope things will get better.”

Ian Taylor travelled to Samos on a travel agent fam trip organised by Sunvil. The operator’s chairman Noel Josephides said: “Newspapers were full of articles on the plight of the refugees landing on the eastern Aegean islands in 2015.

“In 2016, when there are no refugees on Samos and the poor islanders who looked after them with precious little help are suffering from an extreme lack of visitors, the media are silent on the topic.

“This is despite Sunvil’s efforts to get the national media to visit and to report things on the ground. People’s livelihoods depend on tourism.”