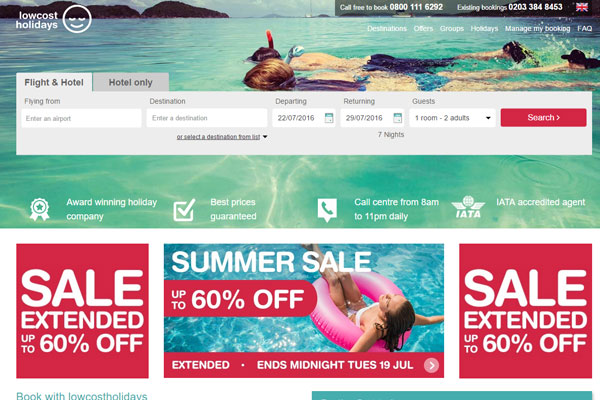 People who booked with Lowcost Holidays are likely to receive compensation of just £7.50 each, the administrator warned last night.

The company has placed a “very limited” bond of £1.09 million with the Spanish travel agency regulator, according to Smith Williamson, which was appointed to wind up the business on Friday.

Compensation claims are expected to be 50 times that amount.

“It said that there is a bond in place but for the very limited sum of €1.3 million. The potential claims from customers are expected to be very substantial and could be more than £50 million.

“There are about 140,000 customers we believe have lost out. Sadly this means there will be very little back for any claim. The compensation will be paid to claimants on a pooled basis so everyone would get back the negligible sum of about 1% or 2%.”

Many customers have lost thousands of pounds and their treatment has raised questions about how the company was allowed to withdraw from Atol, the UK-based protection scheme run by the Civil Aviation Authority.

O’Connell told The Times: “Lowcost Holidays reached an agreement with the Spanish regulator about what bond was acceptable but on the basis that the company was turning over £500 million a year it is clearly a tiny bond.”

The administrator said that the best prospect of customers gaining a refund was if they had booked using a credit card. All credit card providers are obliged to offer protection against companies failing to provide services.

The company left Atol in 2013 in a row over the price of insuring customers’ holidays. Even though two thirds of its customers are British the company exploited EU rules to register with a travel agency regulator in the Balearic Islands, the newspaper reported.

The decision to leave Atol was taken by company founder Paul Evans. At the time, the Civil Aviation Authority said: “In our view, the Balearic scheme provides little protection for UK customers.”

Many employees of Lowcost Holidays and even some board members were unaware of the potential consequences of leaving Atol, The Times reported.

“The team had confidence in him and his decisions so didn’t question him,” a former member of staff said. “I wonder in hindsight whether we should have done that a bit more.”

Another said: “He was a strong leader, who was energetic and hard working. If he asked us to do something we all did it unquestioningly. It was certainly not a democracy.”

Evans is understood to be in Spain ooking for potential partners to buy viable parts of the business.