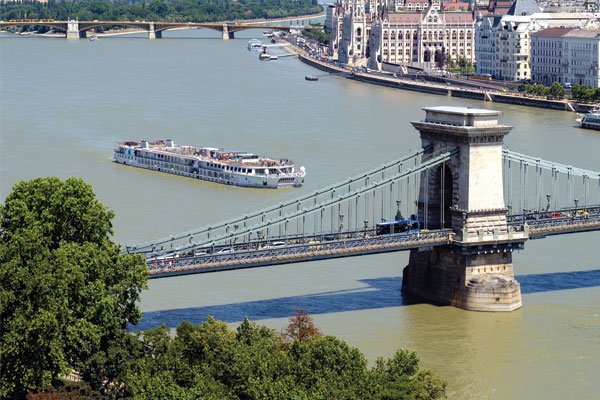 The majority of river ships look the same on the outside, restricted by size limitations of locks and low bridges. Not so Crystal Mozart. The vessel, which started life in 1987 as the River Mozart sailing for Peter Deilmann, holds the record as Europe’s largest riverboat. At 22.9m wide, it’s double the width of some European vessels, yet carries just 154 passengers alongside a higher-than-average crew of 92.

That size means it’s restricted to sailing between Budapest and Passau as it can’t squeeze into locks further along the river, but that’s unlikely to worry passengers as they sail in style along one of the prettiest stretches of the Danube, passing through the Unesco-listed Wachau Valley. 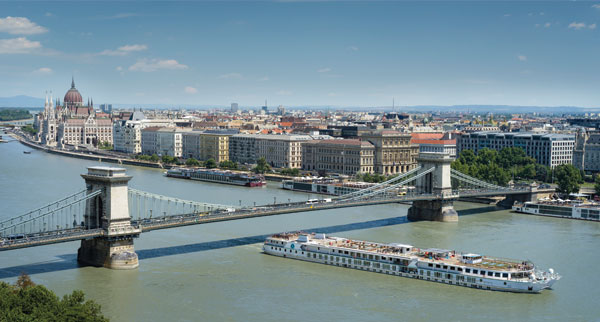 Christened in Vienna in July, the four-deck Crystal Mozart won’t win any prizes for looks alone. But in this case beauty is more than skin deep, and you need to step inside to appreciate the amazing top-to-toe facelift carried out by Crystal Cruises. When it announced its move into the river sector, with the debut of two new vessels in 2017, demand was so great the company decided to take the plunge and enter the river market earlier than planned by purchasing an existing vessel.

Crystal Mozart’s interior is beautiful, with facilities akin to a scaled-down ocean ship. Indeed, Crystal’s existing clients will quickly feel at home as Mozart boasts the Palm Court and Bistro Mozart, both inspired by venues on its seagoing ships.

Although it’s not the only high-end vessel around, it certainly defines a new era of luxury for river cruising with amenities you won’t find elsewhere. It leaves other lines in its wake with the Wider speedboat, opening the way for movie-star moments like setting off on an exhilarating high-speed ride along the Vienna waterfront. The speedboat is an optional excursion, available for VIP Champagne trips at €180 for an hour. 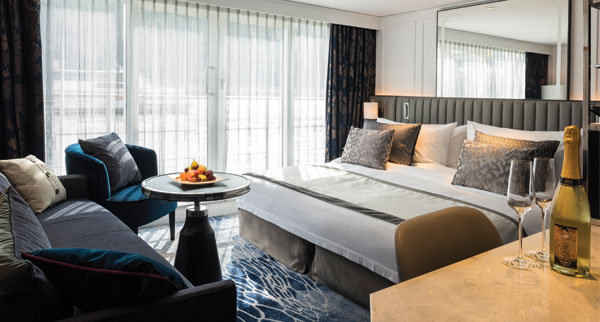 Back inside, Crystal Mozart has 77 cabins in four categories, all with butler service and king-sized beds. The majority are standard suites, with a fixed window or French balcony, but there are 12 penthouse suites and a pair of huge two-bedroom Crystal suites, sleeping up to five. Each cabin is packed with high-end amenities, including an iPad and generous-sized toiletries in marble bathrooms. High-tech touches include variable lighting, a TV in the bathroom mirror and Toto toilet with its automatic lid, heated seat and remote-controlled ‘wash and dry’ options.

With its wide girth, Crystal Mozart can accommodate facilities that are generally tiny or non-existent on other river ships. There’s a spa, with indoor pool, gym, changing rooms, steam room and sauna, tranquil treatment rooms and a relaxation area with plush loungers.

It also has multiple dining areas with ‘farm-to-table’ menus showcasing seasonal, locally sourced ingredients. In addition to the main Waterside Restaurant, there’s the informal Mozart Bistro, Blue Bar and Grill in a lovely position at the back of the ship, and the Pantry for all-day self-service drinks and snacks. The Vintage Room seats 12 for tasting menus (for a fee). All drinks, except for the upmarket wine list, are included in the fare and there’s 24-hour room service.

Aside from the main Palm Court lounge and bar, there’s the intimate Cove and Piano Bar, Connoisseur Club cigar bar and novel ‘pop-up’ Vista Bar on the sun deck, which is lowered below deck when Crystal Mozart navigates low bridges.Book it: Crystal Mozart operates 10 to 13-day round-trip itineraries from Vienna, with ports of call including Durstein, Melk, Linz, Passau, Bratislava and Budapest. A 10-day cruise starts from £3,295 based on a March 2017 departure.crystalcruises.co.uk

This year has seen a raft of new river ships making a splash in the market.

Viking welcomed six Longships to its mainland European fleet, plus the smaller Viking Osfrid, specifically built for the Douro.

Scenic Amber is Scenic’s latest ‘space-ship’ on the Rhine, Main and Danube, while a smaller version, Scenic Azure, has been added on the Douro.

Amadeus Silver III has set sail on the Rhine: all 168 cabins have expansive walk-in wardrobes and, from this year, complimentary wine is served with lunch as well as dinner.

Avalon’s newest all-suite ships with river-facing beds, the 104-passenger Avalon Imagery II and 134-passenger Avalon Passion are cruising on the Rhine and Danube. On the same rivers are AmaWaterways’ 158-passenger sister ships AmaViola and AmaStella, with new features including connecting cabins for groups and families.

American company Vantage Deluxe Travel has launched to the UK trade and its latest vessel, the 176-passenger jazz-themed River Voyager, is a good choice for solo passengers with its eight single cabins. Tauck, another US-based line, has launched Grace and Joy, where 130 passengers are well looked after by a cruise manager and three cruise directors.

New for CroisiEurope on the Loire is the 80-passenger Elbe Princesse, its second vessel powered by modern paddlewheel technology. On a smaller scale, European Waterways has brought in eight-passenger hotel barge Finesse in Burgundy, with a chef’s demonstration galley and some of the largest cabins in the fleet.

Set to have been launched in April, Emerald’s latest new-build Emerald Belle was irreparably damaged by a shipyard fire in January and will now be replaced by Emerald Destiny in 2017.