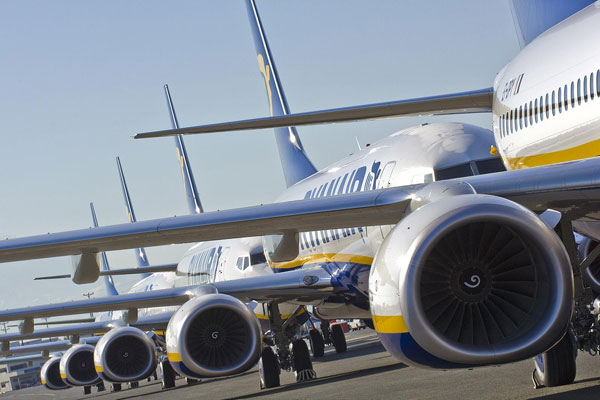 Ryanair issued a note of caution about future financial prospects with Brexit uncertainty and weaker fares being “dominant features” over the next six months.

Fares are expected to fall by as much as 15% over the winter period.

“Despite the uncertainty of Brexit, Ryanair believes that we can deliver profitable growth across Europe by controlling costs, lowering airfares, and maximising load factors in a manner that will most benefit our customers, our people and our shareholders.”

He was speaking today as Ryanair released first half figures for the six months to September showing a 7% rise in profits to €1.168 billion with passenger numbers up by 12% to 64.8 million.

O’Leary said: “We are pleased to report this 7% increase in first half profits, which was a creditable performance in difficult market conditions due to repeated air traffic control strikes, terror events, and the adverse economic impact of the Brexit vote in June which saw sterling weaken materially over the peak summer period.”

But he added: “The uncertainty over Brexit, and the final outcome of the UK’s departure negotiations with the European Union, will continue to overhang our business for full year 2018.

“We expect to see weaker sterling and slower economic growth in both the UK – approximately 26% of our revenues – and Europe.

“We have responded by reducing our planned UK growth in 2017 from 12% to approximately 5%, and switched this capacity to accelerate growth in markets such as Italy, where the government have cut taxes, Germany, where incumbent carriers continue to restructure, and other markets such as Belgium, where competitors are closing routes and bases.

“We hope that the UK will remain a member of Europe’s ‘open skies’ system, but until the final outcome of Brexit has been determined, we will continue to adapt to changing circumstances in the best interests of our customers, our people and our shareholders.”

Ryanair’s mobile app was the eighth largest UK travel app by usage in September – ahead of rivals easyJet in 20th place and British Airways at 37th, according to O’Leary.

A total of 93% of Ryanair bookings are now made direct via the airline’s website – now the world’s largest after overtaking Southwest Airlines.

O’Leary expects membership of the ‘My Ryanair’ scheme, which claims faster bookings and more benefits for passengers, with rise from 15 million in September to more than 25 million by next spring. Membership of ‘My Ryanair’ will be automatic for all bookings in the current quarter “so we can tailor services and improve offers for each customer,” O’Leary said.