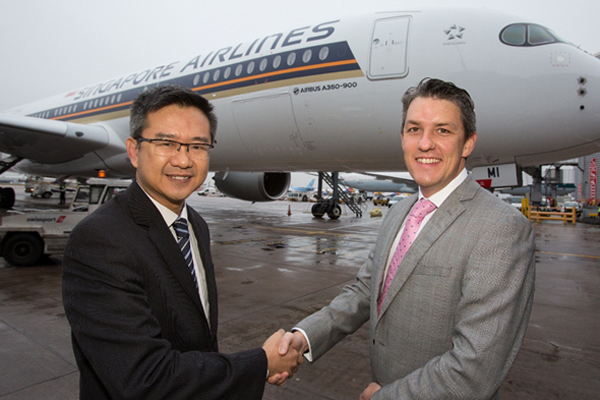 The next generation twinjet will serve both Houston and Singapore from the north-west hub.

The A350’s wings were assembled at Airbus’ £400 million factory in Broughton, Chester.

Manchester airport commercial director, Stephen Turner, said: “The introduction of Singapore Airlines’ A350 is a historic moment as we welcome this aircraft for the first time on a scheduled service here.

“The new direct services to Houston and Singapore are perfect examples of how Manchester airport is connecting to global markets to the east and the west.

“The commencement of this new modern aircraft not only gives our passengers the latest technology but also an additional class when flying with Singapore Airlines.”

SIA UK and Ireland general manager, Sheldon Hee, said: “We are excited to announce our inaugural A350 flight from the UK and delighted to see this happening from Manchester airport.

“The launch follows our recent announcement of new non-stop routes from Manchester to Houston and Singapore, and shows our commitment to the economy and people of the north-west.

“It is great to see that by working alongside Airbus our A350s have helped support jobs in the north-west and wider UK economy and also allowed this region to showcase itself as a hotbed of technological talent.”