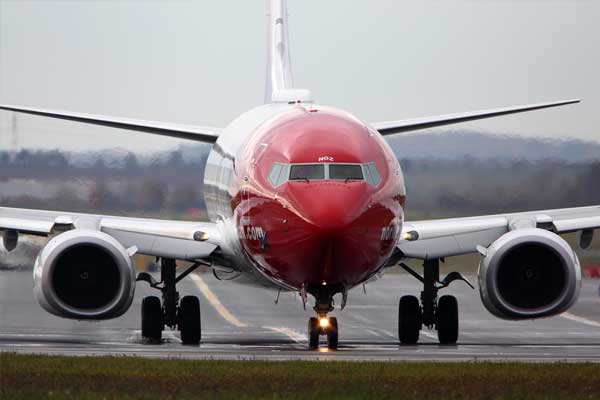 Europe’s third largest low-cost carrier achieved a record net profit of £109 million in 2016, a rise of 361% over the previous year.

This came as annual carryings grew by 14% to 29.3 million passengers as the airline took delivery of more than 20 new aircraft including four Boeing 787-9 Dreamliners.

The load factor increased by 1.5 percentage points to 88%.

Norwegian flew 4.5 million passengers to and from UK airports in 2016, including 4 million at Gatwick.

The airline introduced 10 new routes from UK airports including low-cost long-haul routes from Gatwick to Las Vegas, Oakland-San Francisco and Boston; new flights from Edinburgh and Manchester to Spanish destinations; and the UK’s only direct flights to Rovaniemi in Lapland.

Norwegian’s long-haul network from Gatwick increased to eight US destinations with one-way fares starting at £135.

This unlocks the door for “rapid expansion” of Norwegian’s transatlantic network, with new routes from Ireland and Scotland due to be announced in the coming weeks, according to the airline.

Chief executive Bjorn Kjos said: “We are very pleased to report our best ever results in a year of strong international growth, establishing operations in new markets and tough competition.

“Through our global strategy, we are contributing an economic boost and increased employment at our destinations, as well as ensuring that more people can afford to fly.

“We enter 2017 with the ambition to increase and strengthen our foothold in established markets, while simultaneously developing our route network in new parts of the world.

“This year, 32 brand new aircraft will enter service, including nine Boeing 787-9 Dreamliners. We will launch more than 50 new routes and recruit over 2,000 new colleagues worldwide.”