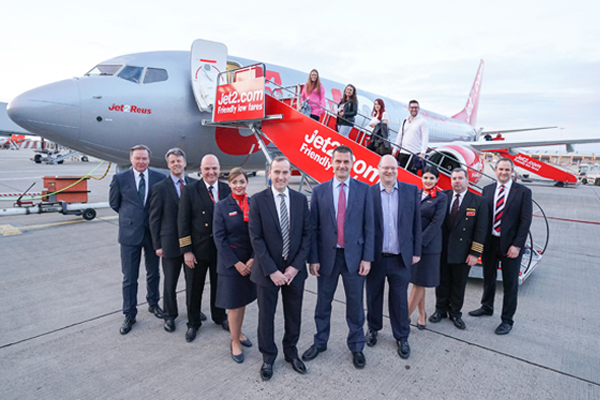 Jet2.com and Jet2holidays celebrated its first flights and holidays from its two newest bases, Stansted and Birmingham.

Jet2.com’s inaugural flight from Stansted to Alicante and from Birmingham to Malaga took off this morning.

Hundreds of holidaymakers were waved off with personalised gifts, with the first customers to check in at each airport also given a free holiday.

Jet2holidays also hosted one of its mobile travel agency trailers at the Bull Ring in Birmingham, co-branded with Midcounties Co-Operative, where a number of flights were given away.

Chief executive, Steve Heapy, said there had been a “fantastic response” from customers since announcing the new bases but there were no plans to add any more for the time being.

“Sales have gone very well for both flight-only and package holidays,” he said. “I’m very happy with where we are at the moment.”

Heapy said the change had made a “small difference” to the business but overall had had little impact on sales.

“There are thousands of independent agents very happy to sell us and we are working hard to maintain those relationships,” he said.

Heapy could not specify a figure but said the number of independent agents selling its product had “increased significantly”.

Asked whether Jet2 would offer price parity to agents, Heapy said: “We have a formula which enables agents to make a decent commission and allows us to operate profitably.

“We have a very close relationship with agents and would urge those considering working with us to speak to those which already do to find out what sort of company we are.

Jet2holidays is due to launch its new package holiday villa programme in the next month with holidays available from summer 2018.