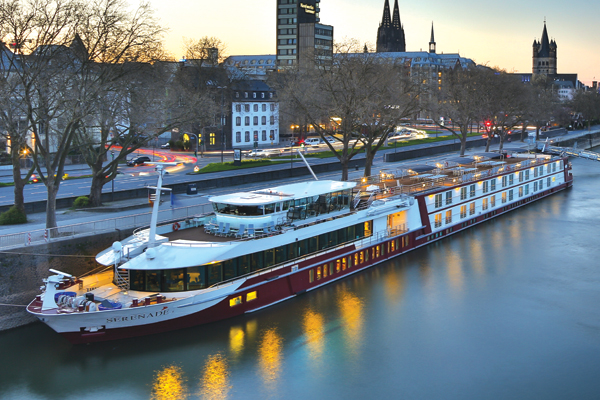 Titan Travel hosted 84 guests on its exclusively chartered ship Serenade I for its maiden sailing from Cologne to Amsterdam. Laura French reports

Titan Travel is already setting its sights on chartering more vessels under its own brand following strong demand for Serenade I.

The four-star, 68-cabin ship will sail 18 itineraries on the Rhine, Main, Danube and Dutch waterways in 2017 and 2018 exclusively for Titan.

It is the first time the premium operator has chartered a whole ship for a full season, having previously chartered vessels on one-off dates or focused on selling other river cruise lines.

Plans for 2019 are yet to be finalised but managing director Andy Squirrell said extending the charter beyond 2018 and adding at least one further ship was highly likely given the performance to date – 91% is already booked for 2017, with around 30% of sales made through agents.

Speaking to Travel Weekly during the ship’s inaugural sailing for Titan, he said: “The success in sales tells us that for 2019 we’ll be looking to do more in terms of a sole ship charter.

“More ships are certainly in our thinking. If we did more in 2019 we’d probably be talking two ships including the Serenade.

“We’d most likely be looking at a similar level – four or five-star.

“We’d also have to think about the size of the ship and whether to go for anything larger.”

Titan also sells river cruises for other lines, including A-Rosa, AmaWaterways and Uniworld.

Squirrell said Titan’s river cruise business had grown by 43% in the last five years in terms of passenger numbers and the sector represents around 15% of the company’s overall business.

Competition from other operators and the desire to have a branded, Titan-focused product were behind the decision to charter Serenade I.

“We’ve been doing river cruising for so long but we felt like it was harder to really own it,” Squirrell said. “When you’re doing brochures with so many departures on so many different cruise lines, it becomes a little bit disjointed and it’s harder to control the quality. Now, if something goes wrong on this, we can just get it sorted.”

He said Serenade I had been chosen for its small size and “personal, family feel”.

The 999-berth vessel will have more than 100 cabins for solo travellers. It is being built in Germany and is due for delivery in summer 2019.

Itineraries will go on sale in September with 20 sailings out of the UK.

Chief executive Robin Shaw said he wants the trade to be the “driving force” behind sales.

“Working with the trade is key to our success and we have been very pleased with the results over the past 18 months,” he said. “We call upon agents to start looking at their mailing lists and drive interest before we go on general sale.”

“It feels like Titan because it feels relaxed. You get the impression the staff on board are very knowledgeable, with a tour guide who will tell them a lot about the destination – and that’s what our clients like.”

“It’s very comfortable and homely and the cabins are a good size. It’s great that you get a bath tub as well as a shower, as you only usually get that in suites. I think the food’s been good too. I’d feel happy selling it to clients after a four-star cruise, probably aged mid-fifties and up.”