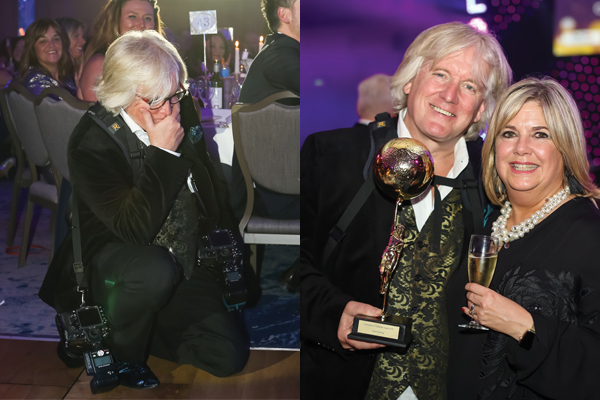 Outstanding Contribution Award: The tables are turned as the Globes honours ever-popular snapper for his 30 years of pin-sharp focus on the industry. Ben Ireland reports

It was only when he heard the words “pictures” followed by “blond locks” spoken on stage that Steve Dunlop realised he was in focus in a different way at this year’s Globes.

The industry photographer, conference stalwart and the event’s official snapper was busy checking his camera settings when it dawned on him that the description of the recipient of the Outstanding Contribution Award – presented by Jeanette Harper of sponsor Avis – was him.

A standing ovation and rapturous round of applause followed as he embraced wife Kristina Wallen, founder of travel recruitment firm Harp Wallen.

“I’m in shock,” he told Travel Weekly in a brief break from his shift. “It’s the most amazing thing. I never expected anything like this, even when it was being read out.”

Dunlop, who took his first travel industry photograph in 1987 having previously specialised in the toys market, said the friendliness of the people in travel was the main reason he stuck around. He recalled how his work “snowballed”, with regular jobs for cruise lines, hotels, airlines and the trade press. And he has been snapping the Globe Travel Awards since 2010.

“The travel industry is one of the most friendly, sociable industries I have ever come across,” he said.

“There are just so many nice people actually enjoying what they are doing who feed off each other.”

Known for his ‘jumping pictures’ at industry golf days, Dunlop has always “tried to avoid boring shots”. He said getting to know industry figures over the years had helped him relax his subjects so he could unleash his creativity.

He even helped Silverjet founder Lawrence Hunt gain investment for the airline with a daring photo of Hunt lying on a sofa on a runway, which attracted the attention of the financial press as well as the travel trade media.

Dunlop explained how photography has changed, from shipping colour films back from trade conferences to sending digital shots straight to social media.

On the evolution of style, he added: “There used to be a lot of staged shots, but these days it’s a lot more reportage-style.”

“A lot of people have been very loyal and shown a lot of trust in me over the years,” he said.