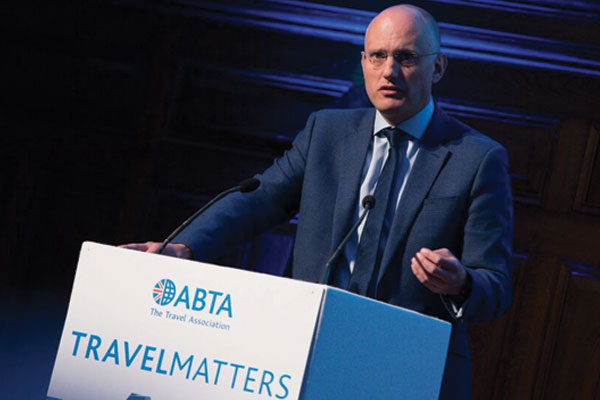 The new chief executive of the Civil Aviation Authority says enforcement of the new package travel regulations will be “proportionate” in the first three months, as he set out five key areas he wants the body to focus on.

Richard Moriarty, who has been in the role for 35 days, said the new regulations, which comes into force on July 1, pave the way for “greater clarity on the definition of a package”.

He said the CAA has “listened and responded” to industry concern over a tight implementation period, adding: “Although these legal changes have been a very long time in coming, I appreciate that it has only been very recently that the industry has seen the finer legal detail.”

Moriarty said the CAA will initially adopt a “light touch approach to licensing changes”, keep changes to the Atol Certificate “to the minimum” and was “unlikely to take action straight away in the first three months”.

He added: “Although we think this three-month grace period is appropriate we will expect every licence holder to have started making plans for compliance as soon as they knew what the new arrangements were.

He said the CAA would keep a “close eye” on the development of Linked Travel Arrangements, “given the possibility of confusion among consumers about what is and what is not protected”.

Moriarty said it is “clear” in the regulations that these services are not included within the Atol regime.

But, he said: “In the consumer’s mind they may well believe that they bought a unitary holiday from a single seller, and be disappointed if they find that seller walking away from problems that the consumer expected them to resolve. We will keep watching the market, assessing how LTAs are working for consumers, and consider appropriate policy responses if necessary.”

Moriarty added that the CAA “continue to see growth in Atol sales” in “a time of much regulatory change”.

His speech highlighted five key areas for the CAA to focus on: safety, infrastructure, the consumer, technology, and the services we provide our stakeholders.

“On safety, I want to ensure that the CAA continues to uphold the highest standards and does not rest of its laurels,” he said. “There cannot be any room for complacency.

“On infrastructure, our goal is to support improving the UK’s aviation capacity and resilience so it can continue to support your aspirations to grow and the future demand from consumers.

“This includes our work on developing a regulatory framework to support an affordable and commercially financeable new runway at Heathrow.” This follows the vote in Parliament on Monday on the National Policy Statement giving Heathrow outline planning permission. It also includes our work on modernising airspace – the vital infrastructure of the sky.

For consumers, he said it was important for the CAA to improve awareness of Atol and extend Alternative Dispute Resolution schemes.

On technology, Moriarty said drones, cyber security and space planes “are just a few examples of things we will need to deal with to ensure the regulatory framework is fit for the future”.

And he added that the CAA offers an efficient service to businesses and individuals who need to transact over permits, licences, certificates, and other issues – and that “part of this includes moving some of our processes online – as we will do with ATOL renewals this year”.

The introduction of an e-Atol facility will help make consumers aware of their protections and enable them to check in “real-time” if needed, he said.

“On a personal level, I’ve been through one massive repatriation exercise following the sad demise of Monarch Airlines and I can attest that for such operations, our ability to access real-time data about who is where, and their contact details, is an essential asset,” he explained.

A feasibility study is underway, he said. “If we take this forward I would want us to work extensively with industry to produce something that can work for everyone.

He also called for more clarity for consumers on additional airport and airline charges, saying that a CAA study found that only 40% of customers read terms and conditions despite ticking a box to say they had.

“Our review is looking at how prominent these terms are, how transparent they are and any restrictions or charges applied by the airline,” he said, adding a report will be published in the autumn.

He also urged the government to listen to the industry’s advice on Brexit and use its guidance in negotiations with Brussels. “Aviation and travel are by definition international businesses,” he said. “We are one of the leading global aviation players and London is the best-connected city in the world. We want to see an outcome that continues to allow aviation and travel to flourish, which means ensuring there is a liberal and open market for businesses to trade within.

“Aviation and travel consumers have benefitted enormously from the choice that has resulted from the liberalisation of the sectors, particularly across Europe. Brexit should not, in our, view, be used as an opportunity to restrict competition.

“We also need to be influential beyond our borders in ensuring safety and security of our citizens. The government and the CAA have been clear that our preference is to remain part of the European Aviation Safety Agency, EASA.

He also warned against Brexit being used to “undermine consumer rights and environmental protections that have been built up over the years”.