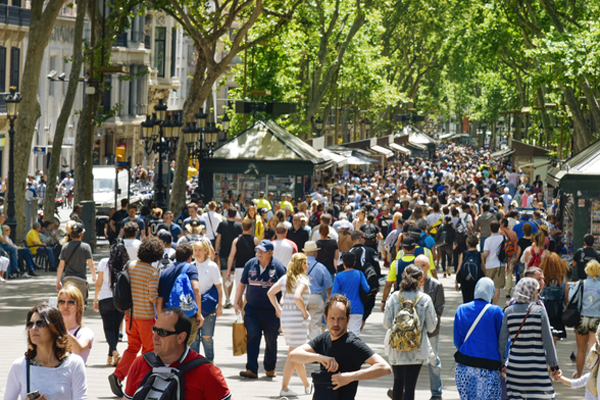 The UN World Tourism Organisation (UNWTO) has warned of intensifying ‘over-tourism’ in popular cities, blaming “the absence of good management and uncontrolled development”.

In a report published late last week, the UNWTO notes: “A rise in negative attitudes among local populations towards visitors due to issues of perceived overcrowding, noise and other nuisances, the emergence of protests in some cities and the spread of terms such as ‘over-tourism’ and ‘tourism-phobia’.”

It warns of “significant increased demand for urban tourism” and suggests the pressure will intensify.

The report, entitled Overtourism: Understanding and Managing Urban Tourism Growth Beyond Perceptions, concludes: “With increasing tourist numbers, tourism must be developed and managed in a sustainable manner for visitors and local communities.”

It suggests three factors contribute to over-tourism: too many visitors “aggravated by seasonality and a perception of overcrowding in parts of a city”; “adverse visitor impact” due to factors such as road congestion or noise disturbance; and “too much physical impact”, such as an over-proliferation of hotels.

However, the report notes: “Overtourism is a new buzzword for existing concepts of tourism-congestion management and tourism carrying capacity.”

Third, tourism congestion “is not a tourism-only problem” as residents also use the resources and infrastructure of a city, and fourth: “Technological or smart solutions alone will not solve tourism congestion.”

The report concludes: “Tourism development and management in cities needs to be part of the wider urban agenda.

“Tourism congestion can only be addressed through close cooperation among tourism and non-tourism administrations. Measures cannot focus only on altering visitor numbers and tourist behaviour, they should also focus on local stakeholders [and] understanding residents’ attitudes towards tourism and engaging local communities is essential.”

It calls on the sector to “re-think current practices”.

UNWTO secretary-general Zurab Polokikashvili said: “Addressing the challenges is a much more complex issue than commonly recognised. Governance is key.”

The UNWTO report includes research on residents’ attitudes in eight cities in Europe.

The survey in Amsterdam, Barcelona, Berlin, Copenhagen, Lisbon, Munich, Salzburg and Tallinn found: “Only a very small percentage consider tourism development and marketing should be stopped.”

At the same time, the research found residents perceived tourism’s “most-positive impacts” tourism as “a greater international atmosphere [and] different cultures in the city, more events, a more-positive image, protection of historical parts of the city, and restoration of traditional architecture”.

The report makes a series of recommendations, noting that city residents favoured the following measures be taken to:

“Improve infrastructure and facilities in the city.

“Communicate with and involve residents and local businesses in tourism planning.

“Communicate better with visitors on how to behave in the city.

“Distribute visitors better over the year.

“Create city experiences where residents and visitors can meet and integrate.”