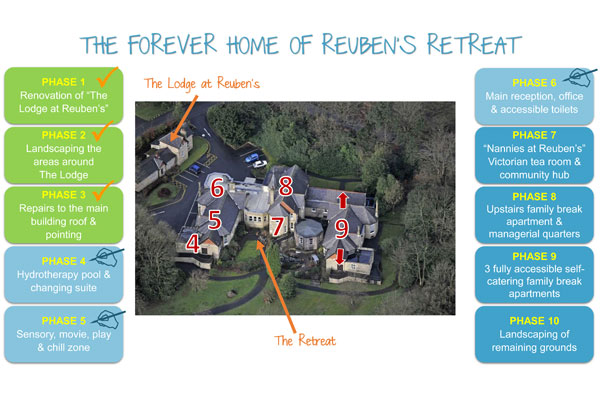 The Reuben’s Retreat charity hopes to start building works early next year on the next phase of development at its premises in Glossop, Derbyshire.

The charity was founded six years ago by industry professionals Nicola and Mike Graham in memory of their son Reuben who died of a rare brain tumour aged 23 months – and has been supported ever since by the travel industry.

In the first three phases of development, the charity renovated ‘The Lodge’, a building which now offers services to support children who have a life-limiting illness and their families.

Now, the charity is embarking on phases four to six, which will see work begin next door on ‘The Retreat’, in a derelict Victorian building, formerly known as Woods Hospital.

Nicola Graham said the tender process has begun with six construction companies, which have either worked with the charity or have undertaken similar projects.

Phase four will see the building of a hydrotherapy pool and changing suite, which will enable the charity to run classes for children.

The fifth phase will include the creation of a sensory room, with a place for children to watch films, chill out or play.

Phase six will see the development of a kitchen, office and reception area.

The completion of these phases will mean that about one third of the Victorian building will be developed.

Also mapped out for ‘The Retreat’ are phases seven to 10, which will see the development of a tea room, community hub, accommodation and landscaping.

Graham said the charity hopes to appoint a construction firm after interviews that start in January, and building work is due to start in February or March, taking about six months to complete.

Graham said: “We still need support and fundraising – there are things people can do for free such as tweeting or sharing our news, or raise money while shopping online with Amazon Smile or the easyfundraising website.

“You can set up regular donations, which is very useful for us to know what’s coming in.

“As an industry, I believe we can finish this project. The sooner we raise the funds, the sooner we can carry on.”

Details of fundraising events can be found on the charity’s Facebook page, and include a ‘Rockin’ For Reuben’ event on November 30 with ‘Elvis’; a ‘SunRaise’ walk up Snowdon in April; and a campaign by staff at Manchester Airport to raise £23,000 in 23 weeks.

“We will have a very visible presence there, and the event will attract thousands of visitors,” she added.

The charity’s fundraising efforts have been buoyed since the appointment in September of two new members of staff: Lindsay Smith, as community fundraiser, and Sarah Leah as senior fundraiser.