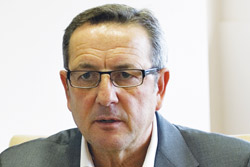 Ownership of Thomas Cook changed after 44% of shares in the company were placed on the London Stock Exchange on September 10 and snapped up by institutional investors.

A consortium of banks sold the 43.9% stake in the group that had belonged to former Thomas Cook parent Arcandor.

German retail group Arcandor placed the stake with the banks as a guarantee for loans, but entered bankruptcy protection in June.

It is poised to be broken up with the loss of thousands of department store and mail order jobs in Germany. The stake changed hands for £904 million.

The sale should have little impact on Thomas Cook trading or staff, other than bringing an end to a period of uncertainty about the structure of the group’s ownership, which will now operate as an independent, publicly quoted company for the first time in its history.

It is unlikely a single investor will take control, although a dominant investor might emerge over time.

Chief executive Manny Fontenla-Novoa said: “The speed at which such a large stake was placed in the market reflected [the fact] Thomas Cook is a leading travel group with unparalleled brands and market-leading margins.”

The banks had pondered a sale to a single investor, and it is understood Fontenla-Novoa considered a management buyout. That was ruled out on the grounds that it would require £2.5 billion for a full takeover – as required by stock market rules if a single investor holds more than 29.9% of a listed company.

German travel group Rewe – the number three behind TUI Travel and Thomas Cook in Europe’s biggest market – expressed an interest in taking up to a 29.9% stake. But Fontenla-Novoa made clear he preferred the shares be placed on the stock market, although the decision lay with the banks.

However, a tie up with Rewe seems likely as travel market consolidation in Germany has lagged that in the UK, and overcapacity in the air has squeezed margins – making Germany less profitable than the UK for both the big two despite the market delivering higher sales and revenue.

Fontenla-Novoa said in August: “If you look at the ideal consolidation, it is us and Rewe.”

Investment analyst Nick Bartram of KBC Peel Hunt said: “Manny may make a move toward Rewe, to try to come up with a strategic deal that could involve one holding a stake in the other.”

Thomas Cook declined to comment, but it is understood there are no discussions with Rewe at the moment.

The only immediate change at the group was on the board, with chairman Karl-Gerhard Eick – chief executive of Arcandor – resigning to be replaced by deputy chairman Michael Beckett.

Beckett was chairman of MyTravel during the period of its control by investment banks between 2004, and its merger with Thomas Cook in 2007.

Stock in Thomas Cook was placed at 240p per share last week and was trading at 255p-256p as Travel Weekly went to press, pushing the value of the group to £2.2 billion.

The share price has traded at this level for much of the past year and was 250p on September 18 2008. However, it briefly plunged below 130p in the financial turmoil last November, before hitting 297p in early May amid speculation about the future of Arcandor.

Insurance group AXA increased its stake in Thomas Cook from 11.6% to 13.7% this week to become the single biggest investor in the group. But the placing is likely to lead to a string of institutional investors holding single-digit percentages.

Thomas Cook is required to reveal details of significant investors once deals are confirmed.