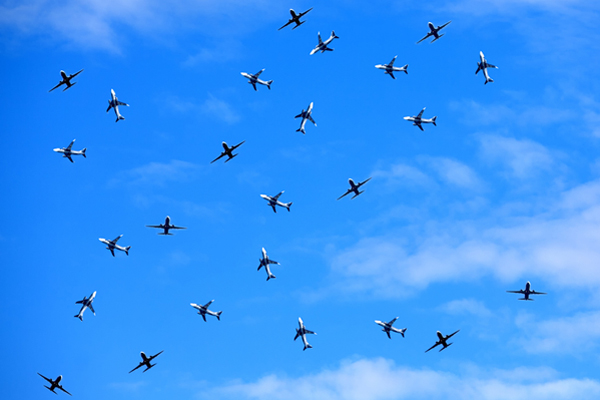 Skies over the south-east of England have reached a peak time air traffic “capacity crunch” due to record levels of flights.

Airline traffic across the UK hit record levels last year with an annual rise of 0.3% to more than 2.5 million flights.

A higher level of traffic was recorded than 2007, the previous peak year prior to the economic downturn, according to air navigation services provider Nats.

The 2018 figures mark six consecutive years of growth since air traffic started to increase again after the global financial crisis.

Travel in May, June and July exceeded previous peaks. A high of 8,854 flights handled by Nats controllers on a single day in the UK was recorded on May 25.

Delay figures have improved despite increases traffic levels, with an average per flight delay of 12.5 seconds in 2018, compared with 26.8 seconds in 2007.

This represents a 60% reduction in delay, attributable in part to the introduction of new technology, Nats said.

“Air travel has never been more popular. This increased demand on our airspace does put it under pressure though, with areas over the south-east already experiencing a capacity crunch at peak times during the day.

“The next few years are critical if we are to futureproof our skies, so we are working with our industry partners now to plan, update and modernise airspace.”