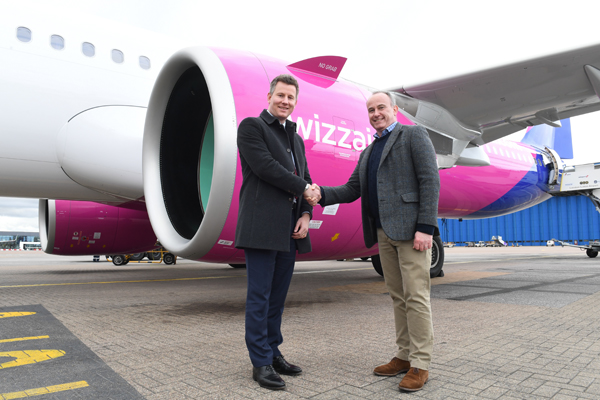 The airport claims the new aircraft, first launched at Luton by easyJet in 2017, has a reduced noise footprint of almost 50%.

The A321neo is being deployed on the Wizz Air’s busiest route between Luton and Budapest.

The new aircraft is the first of 256 A321neo and A320neos Wizz Air will take delivery of over the next seven years.

EasyJet now has 25 neo-type Airbus aircraft in its fleet, with over 100 more on order.

Airport flights operations manager James Dontas said: “It is great news for our local communities that our two biggest airlines are now taking delivery of these quieter aircraft.

“We continue to work with all our airlines to encourage and incentivise the use of quieter aircraft.

“This will make a significant difference, when added to our already stringent noise control measures – the toughest of any major UK airport.”

Wizz Air UK managing director Owain Jones added: “The arrival of the airline’s brand new Airbus A321neo aircraft to our London Luton base is a major milestone for Wizz Air in the UK, both in terms of our industry-leading growth and our aim to become one of the greenest airlines in the sky.

Wizz is proud to operate one of the youngest fleets in Europe, and this new aircraft decreases our environmental footprint even further.”