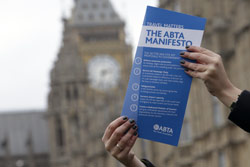 Agents have been urged to call on their local parliamentary candidates to support Abta’s manifesto if they want it to be taken seriously by the incoming government.

The unveiling of the Abta manifesto at the House of Lords on Wednesday came in the wake of Travel Weekly’s Yes Minister campaign, demanding the creation of a dedicated tourism minister.

Lord Graham of Edmonton told an audience of agents, MPs and industry bosses: “The travel industry needs the ear of government. High street branches should use every avenue they’ve got to seek an interview with prospective candidates, put the manifesto on the table and say ‘this is what we want’.”

A number of MPs backed the manifesto. Gordon Marsden, MP for Blackpool South, told Travel Weekly: “The most eye-catching part of the manifesto is the creation of a dedicated tourism minister. However, it is not just about names and titles but about clout. It is important that person is in a department big enough to influence things.”

Agents agreed there was an urgent need for a minister to focus on issues such as Air Passenger Duty. Sandy Travel proprietor Sandra Murray said: “People don’t realise how big our industry is – we’re a force to be reckoned with.”

Presenting the manifesto, Mark Tanzer, Abta chief executive, said: “We need a government focus where the whole picture comes together, a lead department for domestic, inbound and outbound tourism.”

Travel Weekly’s campaign has won high-level backing since its launch on March 5.

Jim Forster, British Airways general manager for regulatory and political affairs, said: “We welcome the proposal as aviation and tourism is key to the success of the UK economy and must be represented to the full by government.”