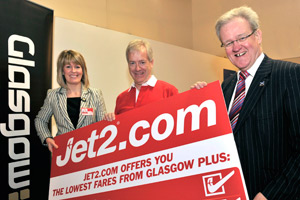 Tickets went on sale today, with flights to Alicante, Majorca and Sharm el Sheikh commencing on March 31; to Nice, Faro and Tenerife on April 1; to Tunisia on April 6, and to Dalaman on May 7.

Jet2.com managing director Ian Doubtfire said: “There is a considerable gap in the market at Glasgow Airport which we intend to fill.”

He added: “It has been a turbulent time for the industry, with some airlines and operators ceasing to trade this year but we have continued to go from strength to strength.”

The carrier launched a new base at East Midlands airport a year ago and also flies from Leeds-Bradford, Manchester, Newcastle, Edinburgh, Blackpool and Belfast.

Glasgow airport managing director Angela McMillan said: “Jet2.com is one of the UK’s most successful leisure airlines and its summer 2011 programme includes many of the Mediterranean’s most popular destinations.”

She thanked investment agency Scottish Enterprise, Glasgow City Council and Renfrewshire Council for their “support towards delivery of this venture”.