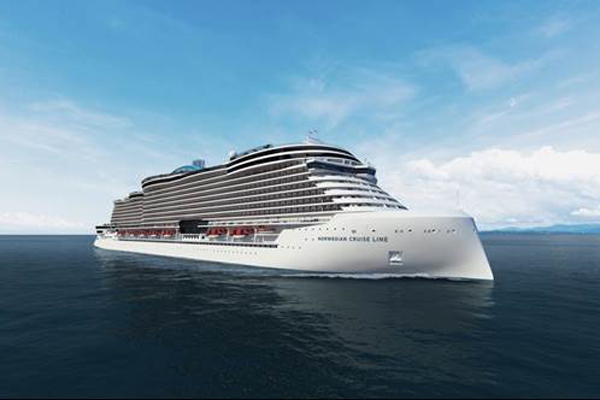 Norwegian Cruise Line is in discussions with shipyards about using Liquefied Natural Gas (LNG) on future ships, but has ruled out powering its next six vessels with the cleaner fuel.

The line’s first 3,330-passenger Leonardo-class vessel will come into service in 2022 before five more are delivered each year after that.

Harry Sommer, who will become NCL’s president and chief executive next year, said only ships beyond Leonardo-class could potentially be powered by LNG.

Speaking on board new ship Norwegian Encore during its preview sailing, Sommer said: “The Leonardo ships are already designed. The design is complete there is no possibility that LNG can be added.

“We are talking to other shipyards – Meyer Werft and Fincantieri – about subsequent classes of ships which will exist after Leonardo series has finished and part of that discussion is about LNG.

NCL’s Leonardo class to sail out of Southampton

“It is too soon for me to say anything because I do not know where those discussions are going to go.”

He added that being as sustainable as possible was “absolutely front and centre” of NCL’s agenda.

Asked for more details about Leonardo ships, Sommer said: “We typically announce our itineraries every year in April, so this upcoming year we will reveal itineraries for November 2021 to November 2022.

“Leonardo launches in June 2022, so clearly we will have some more information to share six months away.”

The line’s outgoing president and chief executive Andy Stuart said the industry has a poor sustainability reputation because ships are such “big visual symbols”.

“We have to do a better job to provide the facts,” he said. “Think how efficiently we are taking people to different destinations.

“We cannot ignore the fact that we are an extremely visual symbol.”

He called NCL “one of the most proactive companies” in terms of environmental sustainability.