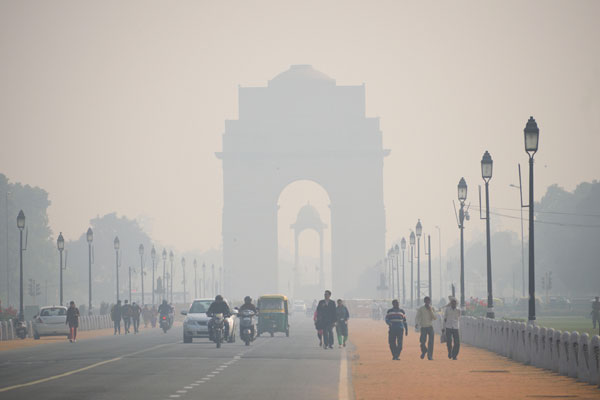 The worst smog to hit Delhi this year forced more than 30 flights to be diverted away from the Indian capital’s Indira Ghandhi international airport.

As many as 19 flights were cancelled on Sunday and 550 delayed affecting thousands of passengers.

Visibility on both runways of the airport fell to 600 metres from 9am to 1.30pm.

A spokesman for India’s busiest airport said: “Due to low visibility 37 flights have been diverted to places including Jaipur, Amritsar and Lucknow, among other cities.”

Schools were ordered to be shut until Tuesday and car rationing was introduced.

Farmers in neighbouring states burning crop stubble to clear fields has been blamed along with vehicle fumes, construction and industrial emissions.

Levels of dangerous particles in the air – known as PM2.5 – are far higher than recommended and about seven times higher than in the Chinese capital Beijing, the BBC reported.

An Indian health ministry official said the city’s pollution monitors did not have enough digits to accurately record pollution levels, which he called a “disaster”.