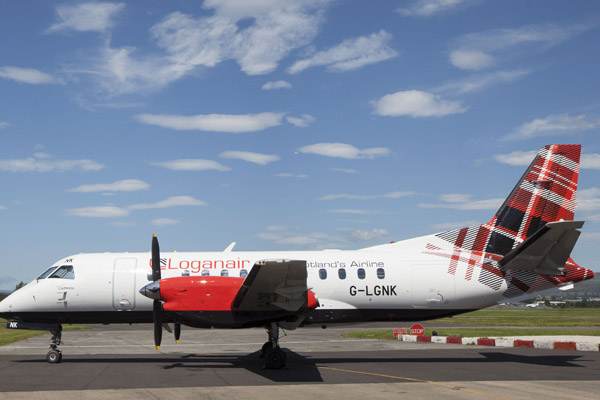 Loganair is switching a Dundee service from Stansted to London City airport.

The air link to the capital is supported by a Public Service Obligation (PSO) which protects routes that boost tourism, connect the UK and encourage economic growth.

The route is backed by funding from the government, Transport Scotland and Dundee City Council.

A larger aircraft will be deployed when flights move to London City from March 29, 2020.

An ATR 42-500 will replace the Saab 340 presently used to Stansted, increasing seat capacity from 33 to 48 seats on every flight.

The new aircraft will also cut carbon emissions per passenger by around 30% against the Saab 340.

The lead-in fare is being cut by £10 to £59.99 each way despite an overall reduction in the public subsidy for the Dundee air service over the lifetime of the new contract.

The Department for Transport announced the renewal of the PSO for another two years in October, with Loganair chosen by Dundee City Council to operate flights from Dundee airport to Stansted and back 11 times a week.

The new Dundee-London City route will be served by two flights in each direction on weekdays and one on Sundays.

Loganair chief executive Jonathan Hinkles said: “There are real benefits for our customers in this move to fly directly into UK’s capital, not least being the reduced travel time to the heart of the city.

“London City Airport is only ten minutes from Canary Wharf and 30 minutes from central London. It’s a substantial time saving on the Stansted Express journey.”

The Scottish carrier is also resuming year-round flights between Dundee and Belfast City from April 2 – the first between the two cities since the end of a previous service in 2012. Fares start at £44.99 one way with up to six flights a week in summer and three a week during the winter.

Mark Flynn, deputy convener of Dundee City Council’s city development committee, said: “The announcement of these routes to and from Dundee into the heart of London and Belfast are attractive propositions for business and leisure travellers, making it quick and easy for them to get directly to and from the city.

“Our air link with the UK’s commercial centre is an important part of our travel infrastructure and a positive piece in the delivery of a strong and sustainable economy that will provide jobs, retain graduates and make Dundee a magnet for new talent.”