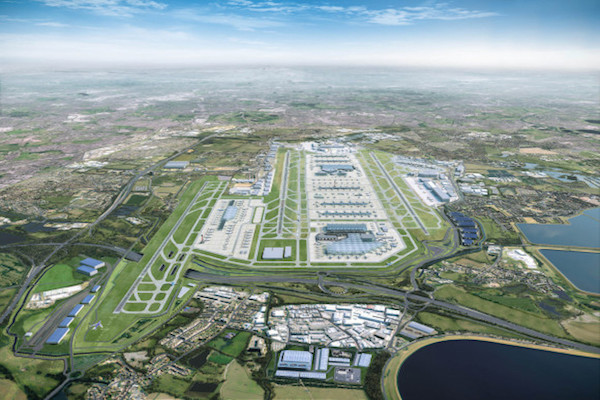 Heathrow charges could rise by up to a quarter when a third runway opens at the London hub.

Two scenarios are reportedly outlined as part of an initial business plan due to be submitted to the Civil Aviation Authority this week.

But under a second option, which prioritises service, airport charges would rise more steeply to £27.19, increasing by about 25%.

The detailed costings include an option to spend an additional £3 billion over the first 15 years to improve rail links and passenger service.

The first plan focuses on savings and would allow the runway to open more quickly in 2028, while the second prioritises service and would require additional investment, delaying the runway opening for a further year.

The second, more expensive, option would see Heathrow invest an additional £500 million every five years on passenger service, such as upgraded passenger lounges and faster delivery of digital service, as well as £750 million each in western and southern rail links.

However, airport charges are set to rise irrespective of which option is chosen – additional costs sure to face strong opposition from Heathrow’s airline customers.

These fees are paid by airlines which then decide how much to pass on to passengers in the form of higher ticket prices.

Heathrow’s fee per passenger is already one of the highest in the world – and the government has pledged that Heathrow should “keep airport charges as close as possible to current levels”.

But the airport argues that overall fares will fall due to heightened competition as expansion will allow low-cost carriers such as easyJet to serve Heathrow.

Chief executive John Holland-Kaye told the Financial Times that the rise in airport charges was “pretty insignificant in the grand scheme of things” compared to the cut in air fares it believes will result from increased competition following Heathrow’s expansion.

In its initial business plan, the airport estimates average ticket savings of between £21 to £142, depending on which scheme is chosen.

“Most significantly we show how this will be a real prize for consumers in bringing down the cost of flights. Our airport charges are going up potentially by less than 10%; for us that’s a fantastic achievement,” Holland-Kaye said.

The submission of Heathrow’s initial business plan comes just days after the London hub said the opening of its third runway could be delayed by up to three years after the CAA said it was minded to approve only just over half the amount London’s busiest airport wanted to spend on its project ahead of final planning approval.

Heathrow had originally planned to open the third runway in 2026 after the £14 billion scheme won outline approval from MPs in June last year.

But the aviation regulator rejected Heathrow’s proposal to more than quadruple certain early construction-related spending to £2.8 billion because of the risk the costs would be passed on to passengers if the project is eventually cancelled.

The CAA said its preference was for spending to increase to £1.6 billion.

British Airways owner International Airlines Group, Heathrow’s biggest customer, said: “The third runway was approved by the secretary of state for transport based on customer charges remaining at current levels.

“Yet Heathrow is already talking about charges going up – they just can’t be trusted.”

Heathrow said it had no preference for either of its two plans.

It will hold discussions with key stakeholders such as the CAA, airlines and consumers over the next six months before publishing its final business plan.

The aviation regulator will be responsible for scrutinising Heathrow’s spending and for agreeing the new passenger charges.