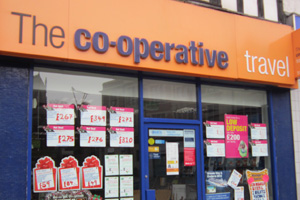 Trade union Usdaw has said it hopes to keep the number of compulsory redundancies to a minimum after the Thomas Cook Co-operative Travel retail joint venture announced the closure of 115 stores.

The proposal to close the stores, based on factors such as lease expiry dates, financial performance and proximity to other stores in the group, puts 661 jobs at risk.

A 90-day consultation has started ahead of the planned closures which are not due to take place before March 17 2012, the trade union said.

The closure programme comes as part of a review of the shop network following confirmation of the creation of the joint venture in October.

As well as The Co-operative Travel’s 360 shops, the joint venture also saw the Midlands Co-operative join with its 100 stores.

Thomas Cook had 780 shops taking the total to 1,300, but this number will be reduced by a total of 200 over the next two years, Cook confirmed today in the preliminary announcement of its annual results.

Sharon Ainsworth, Usdaw National Officer said: “We’ve always known that the creation of the JV was likely to lead to some rationalisation and job losses but have reluctantly accepted this because we remain convinced the JV provides the best way to secure the long-term future of the Co-op’s travel businesses.

“Thomas Cook is fully consulting with Usdaw and our key priority will be to keep the number of compulsory redundancies to an absolute minimum.

“Hopefully there will be opportunities for redeployment and we’ll be trying to maximise these and do everything else we can to support and represent our members through this very difficult time.

“There is never a good time to be told your job is at risk but to hear just before Christmas is particularly devastating for everyone affected.”