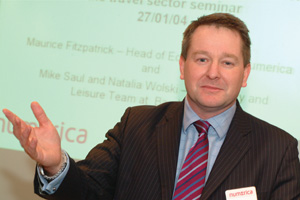 You would be forgiven for thinking it’s Groundhog Day – last week the economy received another bout of quantitative easing (QE) and talks over the Greek debt crisis ended in riots on the streets of Athens. Well, it’s not.

While latest figures from the ONS paint a subdued picture of the travel sector, with outbound numbers up just 1% over the past 12 months, month on month, the figures are more encouraging.

The run up to the festive period traditionally sees more people travelling, and this year was no different, with most airports across the country reporting increased passenger numbers over this period.

Of course the snow of 2010 and the boost provided by the lower comparative base cannot be ignored.

But the additional draw of Christmas and New Year falling at the weekend provided an added incentive for many to take advantage of the way the holidays fell, particularly for those who would not usually look to get away.

While it is clearly too early to declare that change is afoot, our clients are reporting strong bookings for early January.

The ski season is bounding back to form as snow hits the slopes with gusto, but of course the Costa Concordia tragedy has ensured that demand for cruise bookings is subdued.

Given that the current economic backdrop is unlikely to alleviate in a meaningful way in the short term, operators will be looking for fresh ways to engage consumers.

A survey from TravelSupermarket recently highlighted the travel spending patterns of different groups of the population.

On average the over sixties spend more on their holidays than other age groups, however, results from Barclays Corporate’s Ageing Demographic survey shows that the industry is failing to appropriately address the needs of this group of individuals.

The survey of senior executives across the hospitality and leisure space highlighted that almost two thirds (62%) do not have any specific services or products tailored to this group.

The vast majority have no plans to introduce any, with the number one reason given that they simply have not considered it. Just 18% said it was because their products and services are suitable for all ages.

While the picture is slightly more encouraging for the travel sector with a lower, but still significant, 56% stating they don’t have any tailored offerings, it highlights an important issue for the sector.

As the number of people aged 65 and over is expected to rise by an additional 1.4 million in the next five years, it would be a mistake to overlook the opportunities this healthier ageing population can present to the travel industry.

As a generation, the baby boomers have shaped what leisure is today. They pushed the boundaries of travel so that travelling to far flung ends of the earth is not met with the same bewilderment of years gone by.

Forgetting this group of people, whether in marketing campaigns or within specific offerings, would be a mistake.

I’m not saying operators should be making wholesale changes to their products, but consideration should at least be given to any needs the older traveller might have. It could be as simple as having a larger font brochure, or more specific offers on packages.

Such steps in putting the consumer and their needs first will serve the industry well as it continues to battle the headwinds that are unlikely to ease in the short term.