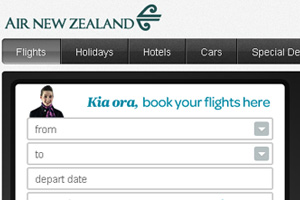 Air New Zealand (ANZ) plans to cut hundreds of jobs after a 61% drop in first half profits.

The carrier is to reduce its workforce by 441 people – 175 through lay-offs and the rest through attrition. The airline has a staff of 11,500.

The airline said the result was disappointing and it has been unable to pass higher fuel costs to passengers in a weaker global economic climate, but it was taking action.

“We have already commenced a series of initiatives to improve the airline’s profitability,” said chief executive Rob Fyfe.

The aim is to improve profits by more than NZ$195 million a year by the 2015 financial year through cost cutting, improved efficiencies and revenue growth, he said.

Domestic routes were boosted by extra traffic during the Rugby World Cup in September and October but long-haul operations were sluggish due to weak European and Japanese travel markets.

This, along with an ongoing climb in fuel costs, was a significant risk to its full-year results, the company said.

ANZ has increased its order of the long-delayed, fuel-efficient Boeing 787 Dreamliner to 10 from eight, although it will likely not receive its first aircraft before 2014, nearly four years late.

“Despite the extremely frustrating and costly delays, we strongly believe the 787-9 is the right aircraft for Air New Zealand and worth the wait,” said Fyfe.

ANZ holds almost 20% of Australian carrier Virgin Blue and runs a commercial alliance on routes between the two countries to counter competitor Qantas and its low cost offshoot Jetstar.