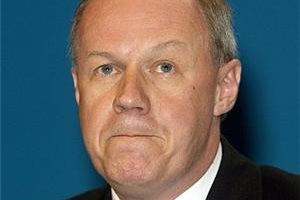 Immigration minister Damian Green was forced to address an emergency Commons debate on the issue on Monday. He told MPs: “There were some breaches of acceptable waiting times at Heathrow over the weekend. This was caused mainly by the severe weather.”

Green acknowledged holders of non-European Union passports were forced to wait up to 90 minutes at Heathrow’s Terminal 5 on Friday night.

Heathrow operator BAA described waiting times as “unacceptable” and said: “We have called on the home secretary to address the problem as a matter of urgency.”

Leaked data showed passport queues at Heathrow Terminal 3 broke official time limits more than 100 times in the first half of April. The limits provide for a 45-minute maximum wait for non-EU passengers and 25-minute maximum for EU passport holders.

London Mayor Boris Johnson wrote to home secretary Theresa May to complain the delays gave “a terrible impression of the UK” and demanded action.

Johnson, who stands for re-election on Thursday, told May: “This summer gives a once-in-a-generation opportunity to promote what is best about London and the UK. It is critical visitors have a great experience from the beginning to end of their stay.”

Green said: “The Border Force will ensure all immigration desks at Heathrow and other key ports and airports in the southeast are fully staffed during peak periods over the summer. A contingency force of appropriately trained staff provide extra help to ensure passengers are processed as quickly as possible.”

He revealed plans for a new Border Force control room at Heathrow and for changes to shift patterns, and said “rapid response” teams would deal with pressure points at the airport’s terminals.

At the same time Green insisted: “Border security will not be compromised.” However, the government plans for a 20% cut in Border Force personnel by 2015.

The Daily Mail is this morning warning of a summer of chaos for travellers as visitors flock to the UK for the London Olympics and Queen’s Diamond Jubilee. IAG chief executive Willie Walsh slammed government claims that the Border Agency was meeting targets as ‘completely meaningless’

He said the official targets were ‘undemanding’ and said evidence used to support the performance of the Border Agency had no ‘statistical relevance’. “Today’s [Monday’s] statement of the government’s apparent intention to tackle the unacceptable delays at airport border controls is long overdue.”

Long delays at Heathrow immigration last summer led the then Border Agency to relax some passport checks. The subsequent press furore led May to sack the head of the agency, restructure and rename the organisation and insist on tighter border controls.