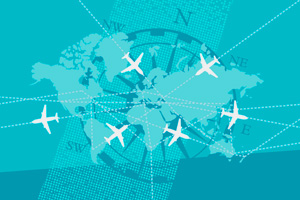 Business travellers are likely to see the highest hotel rate increases in South America next year as the region continues an economic boom.

In contrast, accommodation prices in London will fall back in the wake of the Olympic Games.

The cost of corporate travel by high speed rail is likely to soar by as much as 9% in Europe as more people switch from air.

The findings come from a detailed global travel price forecast for 2013 released by Carlson Wagonlit Travel.

The study indicates that prices in most areas of travel spend are expected to grow modestly around the globe next year, with the most significant inflation expected throughout the Asia Pacific and Latin America regions.

Nick Vournakis, senior vice president, global product marketing and CWT Solutions Group said: “Price increases in 2013 will begin to level off in most regions throughout the world compared to what travel buyers experienced in 2012, as booming economies like Asia Pacific’s begin to normalise, and as uncertainty remains in Europe.

“While slightly higher prices will be the reality again next year as demand for travel outpaces supply in most places, our forecast demonstrates there is still plenty that travel buyers can do to watch costs and take care of travellers through other measures, including re-examining how they influence traveller behaviour.”

The Latin America region continues to see overall economic growth, though significant disparities continue to exist that will create varied travel pricing by country next year, according to the report.

Average daily hotel rates in the region will likely rise about 6.3% in 2013 with Brazil seeing the largest increase.

The country is the only nation in CWT’s entire 48-country forecast expected to see double-digit price increases next year due to strong demand and limited supply.

But that will soon change, as inventory is rapidly being added in Brazil to accommodate the 2014 World Cup and the 2016 Summer Olympics.

The newly formed LATAM Airlines, now the world’s second largest airline by market value, will embark on its first full year of operation in 2013, which may result in improved routes and frequencies to, from, and within the region.

Air fares in the Europe, Middle East and Africa region are forecast to increase by 2.5% with average daily hotel rates up by just 1.3% and car rental by 1.2%

High-speed rail rates will likely increase 4.3% during 2013 as this mode of transportation continues to offer a competitive alternative to air travel in key markets.

Increases of up to 9% are expected in premium-class cabins, where corporate travellers typically ride to access free wireless internet and other amenities.

“As such, the region overall will experience moderate travel price increases in 2013, though the tenuous economy could prompt significant changes at any point.”

Economic growth in the Asia Pacific region is expected to stabilise, leading to modest price increases, although specific results vary widely by country.

While the economies of the US and Canada are experiencing slow and steady improvement, there is no major growth expected for the foreseeable future, which will help contain travel price increases in 2013 for most categories of spend, according to CWT.